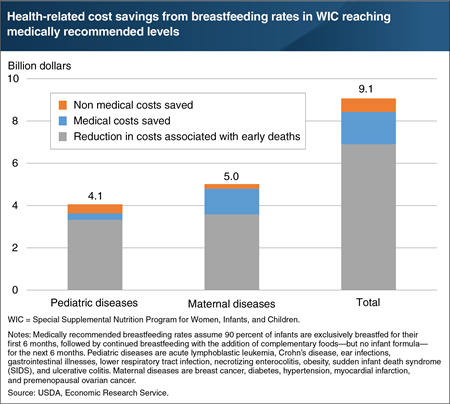 USDA’s Special Supplemental Nutrition Program for Women, Infants, and Children (WIC) encourages and supports breastfeeding among postpartum women participating in the program. Studies have found that breastfeeding confers a number of health benefits to both infant and mother. The American Academy of Pediatrics recommends exclusive breastfeeding for about 6 months, followed by continued breastfeeding until at least 12 months of age as complementary foods are introduced. A recent ERS study estimated the potential cost savings to WIC households and/or their private and government health insurance providers if 90 percent of WIC infants in 2016 had been breastfed for 12 months (first 6 months exclusively). Cost savings were calculated based on estimated reductions in nine pediatric and five maternal diseases. ERS researchers found the estimated cost savings would total $9.1 billion. Three-quarters of the savings, $6.9 billion, is derived from reductions in early deaths of mothers and infants. Medical costs, including physician fees and hospital costs, account for $1.5 billion of the savings, and nonmedical costs, such as lost wages from missed work days due to maternal illness or caring for a sick infant, account for another $0.6 billion. The data for this chart appear in “Economic Implications of Increased Breastfeeding Rates in WIC” from ERS’s Amber Waves magazine, February 2019.