The Agriculture Improvement Act of 2018 (2018 Farm Act) establishes the Agriculture Advanced Research and Development Authority (AGARDA) pilot authority to develop technologies, research tools, and products through advanced research on long-term and high-risk challenges for food and agriculture. AGARDA focuses on R&D that private industry is unlikely to undertake. This research will help ensure that the United States maintains its position as a leader in global agricultural R&D. AGARDA can hire outside of U.S. Code competitive hiring provisions and can receive money from contributions or royalty payments (authorizes appropriations of $50 million annually, FY2019-FY2023).

Previous legislation specified that State-level entities may be required to pay indirect costs (or overhead) themselves to cover the administration of grants by USDA. With the 2018 Farm Act, allowable indirect cost recovery for institutions receiving funding via the Organic Agriculture Research and Extension Initiative and the Specialty Crop Research Initiative increases from 22 to 30 percent of total Federal funds awarded, unless otherwise specified.

The Urban, Indoor, and Other Emerging Agricultural Production Research, Education, and Extension Initiative is a new competitive grants program ($10 million in mandatory funding in FY2019; authorizes appropriations of $10 million annually FY2019-FY2023). USDA is required to conduct a census of urban, indoor, and rooftop farms, and related innovations (authorizes appropriations of $14 million).

New programs at Land Grant institutions (i.e., State-level institutions originally established for the study of agriculture and other applied disciplines) include the following:

New priorities are added to the section of the Competitive, Special, and Facilities Research Grant Act that authorizes the Agriculture and Food Research Initiative:

The Specialty Crop Research Initiative is expanded to include research addressing:

Supplemental and Alternative Crops are expanded to include hemp, canola, and other crops used for rotation purposes and pollinator habitats. Hemp is also added to the Critical Agricultural Materials Act. USDA is required to submit a report on the economic viability of hemp production.

Mandatory funding for the Foundation for Food and Agriculture Research (FFAR) is reauthorized ($185 million compared with $200 million in the 2014 Farm Act). Funds will be transferred upon Congress’ receipt of a strategic plan from FFAR, including plans for FFAR to become self-sustaining. FFAR partners with non-Federal entities for long-term, multi-disciplinary research and development.

The 2018 Farm Act requires a plan for strategic germplasm and cultivar collection assessment and use and calls for recommendations regarding public cultivar development, research gaps, and commercialization of federally developed cultivars for a diverse range of crops. The explanatory statement notes the need to make regionally adapted cultivars available to the public to improve farm productivity, crop marketability, and efficient nutrient use.

Additional provisions authorize two new initiatives: the Next Generation Agricultural Technology Challenge, a competition to develop mobile technologies for beginning farmers and ranchers ($1 million); and competitive grants through the Extension Design and Demonstration Initiative for the design of adaptive prototype systems for extension and education (authorizes appropriations of $5 million annually, FY2019-FY2023). Within the biomass R&D provisions, biobased products now include carbon dioxide intended for permanent sequestration. Increases authorization of appropriations for biosecurity planning and response research by $10 million a year, to $30 million annually for FY 2019-2023.

2014 Farm Act requirements for certain recipients of USDA funding to match funds with non-Federal monies are repealed and replaced with earlier program-specific requirements, where applicable.

Long-term agricultural productivity is driven primarily by R&D from Federal, State, and private-sector institutions. While private-sector agricultural R&D spending has grown rapidly (and now surpasses that of the public sector), private firms pursue research that results in marketable products. Public-sector R&D focuses on fundamental and applied agricultural R&D that can benefit society as a whole. Public research can address problems with little probability of short-term payoffs. However, funding for this research has declined 28 percent between 2002 and 2015, in real terms. 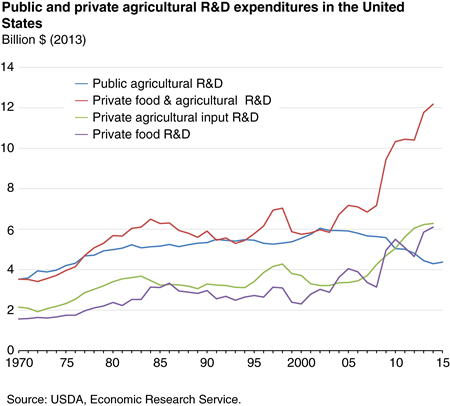 Globally, between 1990 and 2013, the U.S. share of spending among nations with major public agricultural R&D investments fell from 22.5 to 13.4 percent. This decline was driven by a combination of falling U.S. spending and rapidly rising spending in developing countries such as India and China. Chinese public-sector spending on agricultural R&D rose nearly eightfold in real (inflation-adjusted) terms between 1990 and 2013, surpassing U.S. spending in 2008. 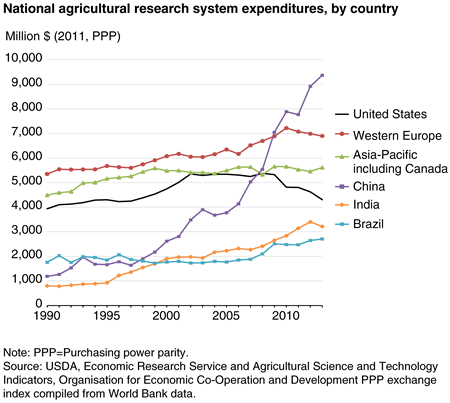 While the U.S. share of global public agricultural R&D has slid, the U.S. agricultural research system remains one of the most productive in the world. The United States is still a leader in agricultural science publications and citations, as well as in agricultural patents. Facing constrained resources, policymakers are seeking to maximize the impact of public research funding, as evidenced by the 2018 Farm Act provisions for a new research model, AGARDA, and reauthorization of funding for FFAR, which was established in the 2014 Farm Act.

Slippage of U.S. funding in agricultural R&D also carries implications for U.S. engagement with the global research community. Many of the scientific and technical constraints facing agriculture are shared among countries and regions. To help ensure that the United States benefits from rising global research capacity, the 2018 Farm Act institutes new collaborative research arrangements between Land Grant institutions and developing countries. These arrangements may help international transfer of scientific advances from U.S. institutions, as well as bring scientific advances from elsewhere to the United States. 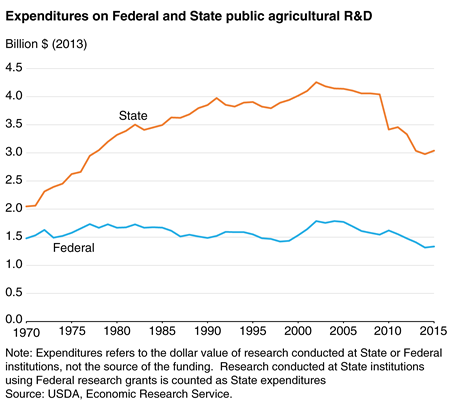 State institutions conduct a larger share of public agricultural R&D than does the Federal Government. The provision increasing the indirect costs (or overhead) States may be required to pay to cover the administration of grants by USDA leverages other sources of funding for State-level institutions and other grant recipients, and effectively shifts a portion of the burden of R&D investment outside USDA. Previously, for certain mandatory grant programs, indirect costs were limited to 22 percent of the grant total. The 2018 Farm Act raises that limit to 30 percent. At the same time, broad requirements for cost-sharing are replaced by provisions more specific to various research programs and topics.