Conservation Reserve Program (CRP)—Continues funding for payments to producers who maintain cropland, marginal pasture, or grassland in grass or tree cover for 10-15 years. The overall acreage cap is gradually increased from 24 million acres to 27 million acres in FY2023. Within the overall cap for FY2023, goals are established of 8.6 million acres for continuous signup and 2 million acres for grasslands. Land that was in CRP under a 15-year contract that expired in 2017 or 2018 is eligible for enrollment. A general signup is required each year. After each general signup, a ranking of grassland contract offers for enrollment is also required (grassland contract offers are accepted continuously).

The 2018 Act requires, to the maximum extent practicable, that 60 percent of acres available for CRP enrollment each year be allocated across States based on historical State enrollment rates. At least 40 percent of continuous enrollment is to be in water quality practices under the Clean Lakes, Estuaries, and Rivers (CLEAR) initiative to the maximum extent practicable. Expiring CRP contracts enrolled under CLEAR or other related water quality practices may also be enrolled in contracts of up to 30 years under a new CLEAR 30 Pilot Program. The Conservation Reserve Enhancement Program (CREP), which has been implemented administratively by USDA, is required by statute under the 2018 Act, which also includes a definition of eligible partner to include both state and nongovernmental partners.

The 2018 Act also sets upper limits on the county average soil rental rates used to set field-specific maximum annual payment rates and sets even tighter restrictions on maximum payment rates for re-enrollments. Incentive payments for continuous signup contracts continue; a payment of 32.5 percent of the first annual payment is required. $12 million is provided for a forest management incentive. Opportunities for routine harvesting, grazing, and other commercial activities on CRP land are expanded (with a reduction in annual payment).

The Soil Health and Income Protection Pilot Program (SHIPP) provides payments for farmers who establish grass cover on less productive cropland for a period of 3-5 years. The CRP Farmable Wetlands Program (FWP) is extended through 2023. The Transition Incentives Program (TIP), which supports the transition of land under expiring CRP contracts from contract holders to beginning or socially disadvantaged farmers, is continued with $50 million in funding. Under the 2018 Act, land can be transitioned from any contract holder (not just retired or retiring farmers).

Conservation Stewardship Program (CSP)—Continues financial assistance to producers who meet stewardship requirements on agricultural and forest lands. Under the 2014 Farm Act, CSP could enroll as many as 10 million new acres each year, at an average cost of $18 per acre. The 2018 Farm Act replaces the acreage cap with a funding cap and provides mandatory funding of $700 million for FY2019, $725 million for FY2020, $750 million for FY2021, $800 million for FY2022, and $1 billion for FY2023. CSP funding was $1.32 billion in FY2018 (estimated) and, had the 2014 Act provision been extended, was projected to be roughly $1.75 billion per year, on average, for FY2019-FY2023 according to the Congressional Budget Office (CBO). CSP contracts will no longer be eligible for a one-time automatic renewal. Producers seeking contract renewals will be required to compete with others seeking new or renewed contracts. Cover crop payments are increased, and supplemental payments are authorized for advanced grazing management, as are payments for the development of comprehensive conservation plans. A new Grassland Conservation Initiative is established within the CSP to assist producers in protecting grasslands for grazing and wildlife.

Agricultural Conservation Easement Program (ACEP)—Continues funding for long-term easements for the restoration and protection of onfarm wetlands and the protection of eligible agricultural land from conversion to nonagricultural uses. Program funding declined during FY2014-FY2018, averaging $405 million per fiscal year but declining to $250 million by FY2018. Program funding is $450 million per year for FY2019-FY2023. A series of amendments broadens program eligibility, improves enforcement, and provides additional flexibility in managing easements.

Regional Conservation Partnership Program (RCPP)—Provides assistance to partners to solve problems on a regional or watershed scale. The 2018 Farm Act increases mandatory direct funding to $300 million per year for FY2019-FY2023 but eliminates the requirement that 7 percent of funds from “covered programs” be transferred to and allocated through RCPP. RCPP direct funding was $100 million per year under the 2014 Farm Act. Under the new act, RCPP will function as a standalone program, rather than through covered programs. Covered programs, which now include the Conservation Reserve Program and Watershed Protection and Flood Prevention Act, will serve largely as a guide to the activities that can be funded through RCPP partnerships. The 2018 Act also requires the Secretary of Agriculture to provide guidance on quantifying natural resource outcomes for projects and allocates 50 percent of funding for State and multistate projects and 50 percent for projects centered on critical conservation areas.

For FY2019-FY2023, the CBO projects mandatory spending on farm bill conservation programs that is slightly higher than projected baseline spending (spending under an extension of 2014 Farm Act programs, without modification, through 2023). For the five largest conservation programs (and predecessors), inflation-adjusted spending increased under both the 2002 and 2008 Farm Acts (2002-2013, see chart), but was lower under the 2014 Farm Act (2014-2018). CBO projections suggest that the 2018 Act could provide slightly higher funding, on average, than under the 2014 Act. Although program funding is mandatory (does not require appropriation), spending in future years is subject to congressional review and, under past farm acts, has sometimes been reduced from specified levels. 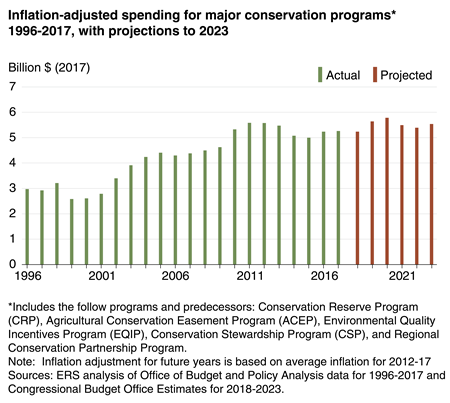 While overall conservation funding is roughly equal to baseline levels for FY2019-FY2023, the 2018 Act shifts funding among programs. The acreage enrollment cap in the Conservation Stewardship Program (CSP) is replaced with a funding cap that implies lower spending in the future. Contracts signed under the acreage-limited CSP will continue; contracts that expire before December 31, 2019 can be renewed. Going forward, the 2018 Act sets spending limits of $700 million for FY2019, increasing to $1 billion by FY2023. CSP funding was $1.32 billion in FY2018 (estimated) and was projected to be roughly $1.75 billion per year, on average, for FY2019-FY2023 according to the CBO. Over the next several years, as spending for existing CSP contracts ramps down and spending on new contracts ramps up, CSP spending will eventually reach an overall lower level of spending commensurate with new limits. 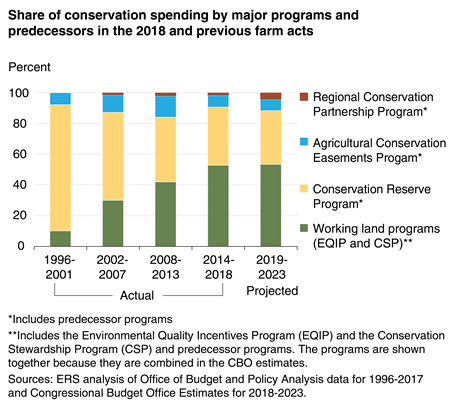