Mexico’s agricultural programs reflect the heterogeneity of the country’s agricultural sector. Producers range from large commercial operations to small, subsistence-oriented farms. Accordingly, some Mexican farm programs are geared more for advanced commercial operations, others are designed to advance less developed operations, and still others are available to virtually all producers. Mexico’s current presidential administration (2018-24) has emphasized policy initiatives focused on small- and medium-scale farmers. This reorientation of the Mexican Government’s activities concerning agriculture is accompanied by a reallocation of resources dedicated to such activities.

SADER and the Special Concurrent Program 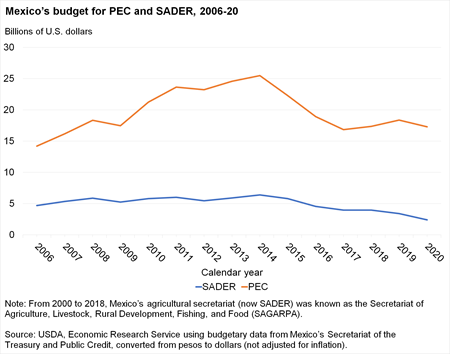 For 2019, SADER was allocated a budget of 65.4 billion pesos (about $US 3.4 billion). About two-thirds (66 percent) of this amount was dedicated to six programs: 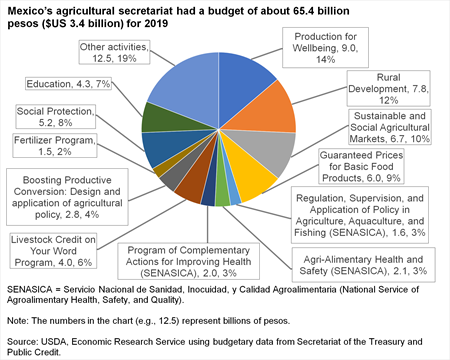 In the area of agricultural finance, Mexico has traditionally counted upon several government financial institutions to augment the activities of the commercial banking sector:

Mexico’s budget for 2020 allocates to FND all funding that previously would have gone to these three entities, suggesting their possible combination soon.

One area of public policy interest is small and medium-sized producers—an area that intersects with the objectives to promote access to financing and to boost productivity, as well as other areas of public policy interest such as gender equity. By enhancing the access of such producers to credit and providing training and technical assistance, the plan seeks to integrate them more into agribusiness and marketing.

In 2018, FIRA lent 287.6 billion pesos ($US 14.9 billion) for agricultural and rural financing, a real increase of 23 percent from 2017. Of this amount, 82.6 billion pesos ($US 4.3 billion) was devoted to long-term credit balance, a real growth of 12 percent from 2017. This increase is to promote productivity through financing capital goods, and modernization for agriculture and fisheries. 66.1 billion pesos ($US 3.4 billion) corresponded credit funding for small businesses and families. (The subtotals in dollars do not add up to the total amount due to rounding.)

FND (formerly named Financiera Rural) was created as a replacement for Banco Nacional de Crédito Rural (BANRURAL), which was dissolved in 2003. FND’s mission is to increase financing at the first tier—via the delivery of resources to direct beneficiaries—and at the second tier—via the delivery of resources through Rural Financial Intermediaries—for any economic activity carried out in rural communities under 50,000 inhabitants that improves their quality of life.

Unlike BANRURAL, FND is not a bank and does not offer savings accounts. Rather than disperse funds through its own network of offices, FND does so through branches of affiliated banks. It also operates programs to distribute credit through other entities and to facilitate contract agriculture. In 2018, FND provided about 74.7 billion pesos ($US 3.8 billion) in financing to Mexico’s agricultural, livestock, and rural sectors.

FOCIR’s mission is “to support and complement the economic capacity of rural producers and their economic organizations, to encourage the development and consolidation of rural and agro-industrial companies, through investments, long-term investment, in a temporary and minority form, that trigger projects of high potential and social benefit,” according to the fund’s website.

Agricultural support estimates calculated by the Organization of Economic Cooperation and Development (OECD) provide a common framework for evaluating the size of government support to agriculture. The Total Support Estimate (TSE) measures “the annual monetary value of all gross transfers from taxpayers and consumers arising from policy measures that support agriculture, net of the associated budgetary receipts, regardless of their objectives and impacts on farm production and income, or consumption of farm products.” In 2018, Mexico’s TSE equaled about 1,082 billion pesos ($US 56.2 billion). This estimate includes some agriculture-related activities that took place outside of SADER, and it does not cover some activities of SADER that the OECD does not count as government support to agriculture.

Market Price Support (MPS) is calculated “by adding together the price transfers to producers from consumers and taxpayers, minus the contribution that producers make to these transfers.” For an individual commodity, these price transfers are estimated by multiplying the Market Price Differential (MPD) by the quantity of domestic supply, where the MPD is the difference between the domestic market price and the border price of the commodity, measured at the farm gate level. In 2018, raw sugar accounted for 65 percent of Mexico’s MPS. Tariffs on agricultural imports from various non-NAFTA countries are the main policy that corresponds to Mexico’s MPS. Another way to consider the level of Mexico’s agricultural support is to compare it to the value of the country’s agricultural production using a measure called the percentage PSE, which equals the amount of producer support divided by the sum of transfers from taxpayers to producers plus the value of agricultural production. During 2016-18, Mexico’s PSE was in the range of 7-8 percent, roughly the same level as the U.S. PSE and about half the OECD country average. 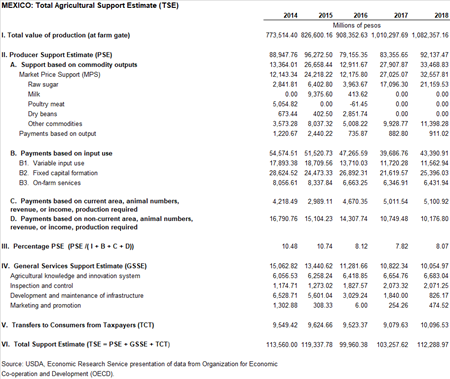