Canada's agricultural and trade policies encompass such market-oriented activities as participating in the United States-Mexico-Canada Agreement (USMCA) and encouraging a savings program for producers that is decoupled from production. Other activities, such as supply management in the dairy, egg, and poultry sectors, represent significant interventions in the market and limit the extent to which foreign suppliers can serve Canadian customers.

The Canadian Agricultural Partnership (CAP), the most recent policy framework for Canada’s domestic agricultural supports, was announced by Federal, Provincial, and Territorial (FPT) agricultural and food ministers at their annual meeting in July 2017 and took effect on April 2, 2018. The CAP is similar to the previous framework, Growing Forward 2 (GF2), in its approach to funding, intergovernmental cost-sharing, and programming. It represents an expenditure of about 3 billion Canadian dollars (CAD) (2.3 billion U.S. dollars) over a 5-year period (2018–22). Of the total, $2 billion CAD is being financed on a cost-sharing basis between the Canadian Federal Government (60 percent) and the Provincial and Territorial governments (40 percent). The remaining $1 billion CAD is dedicated to programs that foster innovation, competitiveness, and marketing; these programs are financed solely by the Federal Government.

In 2022, the Canadian Government is working on the Next Policy Framework (NPF)—the agricultural policy framework to succeed the CAP, which is scheduled to expire on March 31, 2023. At their annual meeting in November 2021, the agricultural and food ministers of the FPT governments issued the Guelph Declaration, which outlines a direction for the NPF. The declaration identifies five priority areas for the NPF: (1) climate change and the environment; (2) science, research, and innovation; (3) market development and trade; (4) building sector capacity and growth; and (5) resiliency and public trust. During 2021–22, the FPT governments are seeking input for the NPF from a diversity of stakeholders—"producers, processors, Indigenous communities, women in agriculture, youth, environmental organizations, and small and emerging sectors,” according to an announcement from AAFC.

CAP retains a suite of business risk-management (BRM) programs, with some modifications, that were part of both GF2 and the original Growing Forward policy framework. The four main BRM programs are:

In addition to these programs, the FPT governments continue to support the development of new risk management tools through the AgriRisk program.

AgriInvest is described by the Canadian Government as “a self-managed producer-government savings account that allows producers to set money aside which can then be used to recover from small income shortfalls, or to make investments to reduce on-farm risks.” Participants may deposit up to 100 percent annually of the difference between their sales and purchases of allowable commodities, defined as Allowable Net Sales (ANS), into an account and receive a matching contribution from the FPT governments. The matching contribution equals 1 percent of the deposit and is capped at $10,000 CAD per year, compared with $15,000 CAD under GF2. The account balance is limited to 400 percent of ANS. AgriInvest covers most primary agricultural commodities, except those governed by supply management (dairy, poultry, and eggs). CAP sets the maximum ANS under AgriStability to equal $1 million CAD, compared with $1.5 million CAD under GF2.

AgriStability partially covers declines greater than 30 percent in the margins of participating producers. The program is triggered when a participating producer’s “program margin” (allowable revenue less allowable expenses) falls to less than 70 percent of its 5-year Olympic average "reference margin." Producers participating in the program must pay a fee of $4.50 per $1,000 CAD of insured margin and a fixed administrative cost fee of $55 CAD per account. In addition, CAP has added a late participation mechanism to AgriStability that Provincial and Territorial governments can use “to allow producers to enter the program late in situations where there is a significant income decline and a gap in participation.”

AgriInsurance encompasses benefits previously provided under the Crop Insurance program. The program aids farmers in mitigating risk by insuring losses to production and farm assets caused by natural perils. The program is similar to the U.S. crop insurance program, with the significant difference being that the program is delivered through governmental crown corporations and Provincial administrations in Canada rather than the private sector as in the United States. Premiums are shared between the producer, the Provincial government, and the Federal Government.

AgriRecovery is a framework through which the FPT governments jointly assess the impacts of natural disasters on producers and the need for new initiatives to assist producers facing natural disasters whose needs have not been met by the other programs. AgriRecovery focuses on extraordinary costs that are necessary for the quick resumption of farming operations after a natural disaster or the mitigation of the adverse effects of such a disaster and are not covered by other government programs.

Supply management has been a feature of Canadian agricultural policy for over four decades and continues to be dominant in the dairy, poultry, and egg commodity sectors. Production and marketing systems under supply management have three main features:

The Government of Canada has expressed its support for the choice made by producers operating under supply management. This position has been communicated in many fora, including the Doha Round of multilateral trade negotiations at the World Trade Organization (WTO) and the negotiation of the United States-Mexico-Canada Agreement (USMCA), the successor to NAFTA. The USMCA, which went into effect in July 2020, created a set of new TRQs specifically for U.S. exports to Canada for selected supply-managed commodities that allows these exports to grow above past levels.

Sale of Canadian Wheat Board

The Canadian Wheat Board (CWB) was a shared governance marketing organization that operated as the sole marketer (the “single desk”) of wheat and barley produced in western Canada. Acting as a single agent on behalf of farmers, the CWB had statutory authority to purchase and market all wheat and barley produced in Alberta, Manitoba, Saskatchewan, and the Peace River District of British Columbia, both for domestic use and export.

In July 2015, Canada’s Federal Government finalized the sale of the CWB to G3 Global Trade Group, a joint venture between SALIC Canada Limited and Bunge Canada. The former CWB was combined with Bunge Canada and is now part of a firm called G3 Canada Limited, with facilities in the Provinces of Saskatchewan, Alberta, Manitoba, Ontario, Quebec, and British Columbia. SALIC Canada Ltd. is a wholly owned subsidiary of SALIC (Saudi Agricultural and Livestock Investment Company), a joint stock company owned by Saudi Arabia’s Public Investment Fund. As of 2022, the company included two operating companies—one featuring grain elevators in western Canada and port terminals in eastern Canada; and the other featuring an export terminal in Vancouver. The former company now includes farmers from western Canada among its shareholders, while the latter is a joint venture with a stevedoring company.

Agricultural support estimates calculated by the Organisation for Economic Co-operation and Development (OECD) provide a common framework for evaluating the size of government support to agriculture by the OECD countries. The Total Support Estimate (TSE) measures "the annual monetary value of all gross transfers from taxpayers and consumers arising from policy measures that support agriculture, net of the associated budgetary receipts, regardless of their objectives and impacts on farm production and income, or consumption of farm products." In 2020, Canada's TSE was about $8.5 billion CAD ($6.3 billion U.S.). 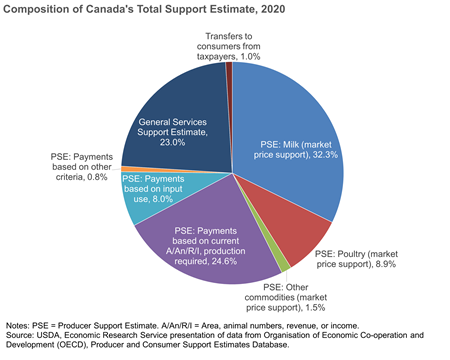 The OECD calculates MPS "by adding together the price transfers to producers from consumers and taxpayers, minus the contribution that producers make to these transfers." For an individual commodity, these price transfers are estimated by multiplying the market price differential (MPD) by the quantity of domestic supply, where the MPD is the difference between the domestic market price and the border (reference) price of the commodity. Thus, Canada's MPS estimates for milk, poultry, and eggs provide some indication of the level of support provided by supply management. In 2020, milk accounted for 75.7 percent of Canada's MPS, followed by poultry (20.8 percent) and eggs (3.4 percent).

Payments associated with Canada's suite of BRM programs are classified in the category of producer support in the form of payments based on current area, animal numbers, receipts, or income, where production is required.