Household Food Security in the United States in 2021 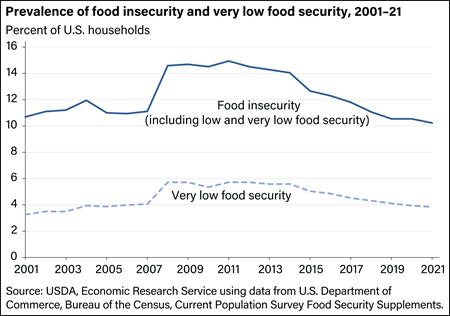 In 2021, 10.2 percent of U.S. households were food insecure. The 2021 prevalence rate was statistically unchanged from 2020 (10.5 percent). Food-insecure households—those with low and very low food security—had difficulty at some time during the year providing enough food for all their members due to a lack of resources.

In 2021, 3.8 percent of U.S. households had very low food security, not significantly different from 3.9 percent in 2020. In this more severe range of food insecurity, the food intake of some household members was reduced and normal eating patterns were disrupted at times during the year due to limited resources.

Discussion/comment: Food insecure does not always mean "hungry." The 14.6 percent was actually the percentage of households that were food insecure in 2008. "Were hungry" describes a more severe condition, and most U.S. adults would not consider conditions in most food-insecure households to be appropriately described as such (for a discussion of U.S. adults’ perception of what “hunger” means, see “What Should the Government Mean by Hunger?”, by Mark Nord, Max Finberg, and James McLaughlin, in Journal of Hunger & Environmental Nutrition, 4:20-47, 2009.

Alternative, accurate language (updated to 2021 statistics): "In 2021, 10.2 percent of U.S. households were unable to put adequate food on the table at times during the year." (Further description may clarify that for most food-insecure households, the inadequacies were in the form of reduced quality and variety of food rather than insufficient quantity.)

Alternative, accurate language (updated to 2021 statistics): "In 2021, 521,000 children lived in households where one or more of the children experienced very low food security."