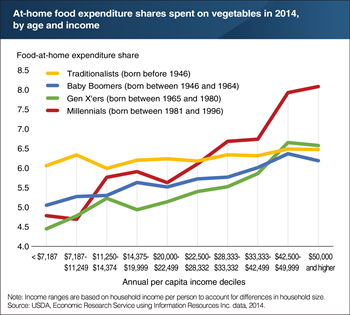 Labor’s share of the retail food dollar was up to 50.6 cents in 2016, driven by Americans’ appetite for eating out 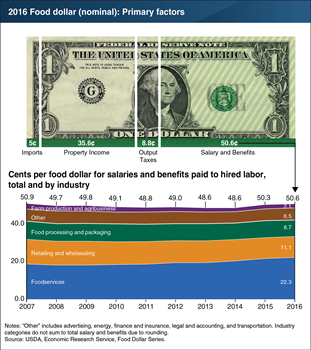 In 2016—of a typical dollar spent by U.S. consumers at grocery stores and restaurants on domestically produced food—50.6 cents were received by hired labor in the form of salaries and benefits. That marked the second year in a row that labor’s share was over half of the food dollar, reflecting higher spending on eating out, as well as small increases in labor costs for foodservice workers over time. Foodservice labor—servers, cooks, and others—received 22.3 cents of the food dollar in 2016, up from 21.7 cents in 2015. Salaries and benefits for non-foodservice labor were down 0.3 cent from 2015. After foodservices, the next two largest sources of labor costs in 2016 were retailing and wholesaling (11.1 cents) and food processing and packaging (8.7 cents). Farm production relies less on hired labor than other food related industries do, and—combined with agribusinesses that provide specialized farm inputs—contributed only 2.1 cents of 2016’s food dollar labor costs. Many factors drive year-to-year changes in labor’s share of the food dollar, from the adoption of labor-saving technologies to changes in average wage rates. This chart is from ERS’s Food Dollar Series data product.