Throughout most of the day, more women prepared food than did men in 2014-2017 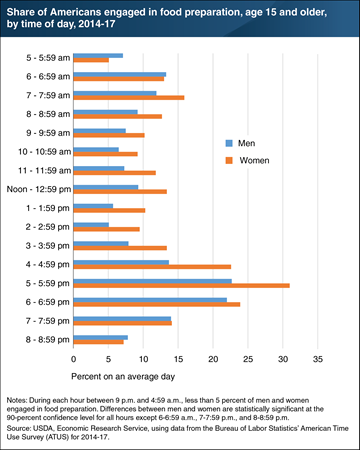 ERS researchers used data for 2014-17 from the Bureau of Labor Statistics’ annual American Time Use Survey (ATUS) to determine when Americans engage in food preparation and to look at gender differences. Over an average day in 2014-17, 54 percent of people age 15 and older engaged in food preparation with a noticeable gender disparity: 65 percent of women prepared food on an average day, compared to 41 percent of men. Counting only those Americans who prepared food on the day recorded in the survey, an average of 51 minutes per day were devoted to the activity, and women devoted more time than men (57 minutes versus 42 minutes). The peak times for food preparation were at 7 to 7:59 a.m. (14 percent), followed by a smaller peak at noon to 12:59 p.m. (12 percent) and a much larger peak at 5 to 5:59 p.m. (28 percent). More women than men engaged in food preparation from 7 a.m. to 6:59 p.m. A version of this chart appears in the ERS report, Food-Related Time Use: Changes and Demographic Differences, November 2019.