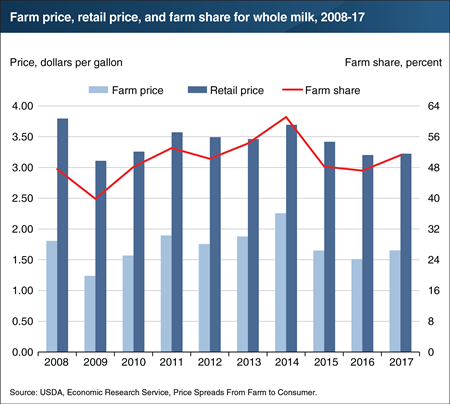 Over the past decade, the farm share for a gallon of whole milk—the ratio of what dairy farmers received (farm price) to what consumers paid in grocery stores (retail price)—has fluctuated between 40 and 61 percent. It peaked at 61 percent in 2014 as higher U.S. exports of cheese, butter, and nonfat dry milk allowed farmers to collect higher prices for farm milk. However, U.S. exports weakened in 2015 with changes in international dairy markets and slower growth in global demand for dairy products. Exports of cheese, for example, decreased by 14 percent from 2014 to 2015. The farm price of whole milk fell from $2.26 per gallon in 2014 to $1.65 in 2015 before bottoming out at $1.51 in 2016, or 47 percent of the retail price. In 2017, the farm price of whole milk returned to $1.65 per gallon, and dairy farmers received 51 percent of whole milk’s retail price. According to ERS forecasts released in September 2018, the annual average price received by dairy farmers for milk may be less in 2018 than 2017, but is expected to increase through 2019. This chart is based on the Price Spreads from Farm to Consumer data product on the ERS website.