Meat production on the rise in former Soviet Union countries 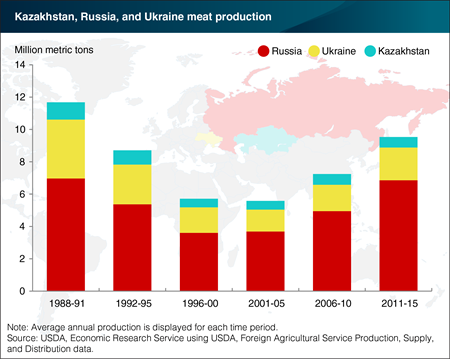 Former Soviet Union countries, Russia, Ukraine, and Kazakhstan experienced significant contractions in meat production in the 1990s and early 2000s. This trend reversed since 2005, with meat production over 70 percent greater in 2011-15 than the low point in 2001-05. The move from a centrally planned to a market based economy in the 1990s upended the growth of the livestock sector. Because of severe financial constraints, the large budget subsidies to agriculture—and especially the previously favored livestock sector—were mostly terminated, which led to reduced production. Aided by renewed subsidies and other policies beneficial to the industry, the livestock sector in these countries rebounded. From 2000 to 2015, average annual meat production rose in Kazakhstan (39 percent), Russia (116 percent), and Ukraine (50 percent). This chart appears in the ERS report Changing Crop Area in the Former Soviet Union Region released in February 2017.