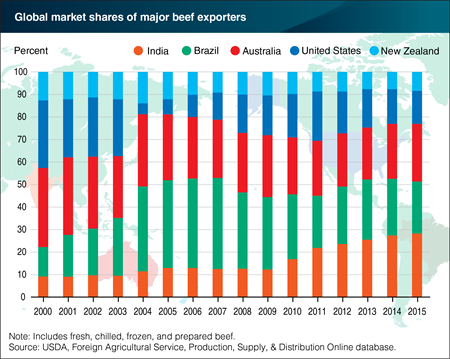 Since the late 2000s, India’s exports of beef—specifically water buffalo meat, also known as carabeef—have expanded rapidly, with India moving just ahead of Brazil to become the world’s largest exporter in 2014. India’s beef exports during the period have grown at an annual rate of about 12 percent, rising from an average volume of 0.31 million metric tons during 1999-2001 to an estimated 1.95 million during 2013-15. India’s robust export growth contributed to the expansion of world beef trade during this period and also increased the country’s share of the volume of shipments by major world beef exporters from just 5 percent during 1999-2001 to about 20 percent during 2013-15. The U.S. market share fluctuated during this period but declined from an average of 18 percent during 1999-2001 to 12 percent during 2013-15. This chart is from the ERS report, From Where the Buffalo Roam: India’s Beef Exports, released June 22, 2016.