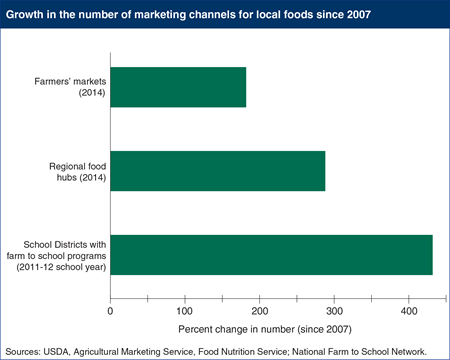 Local foods is one of the fastest growing segments of U.S. agriculture, and the number of local food marketing outlets is increasing. Growing demand for local foods in the United States is, at least in part, the result of consumer interest in environmental and community concerns, including supporting local farmers/economies and increasing access to healthful foods. American farmers and consumers are increasingly finding more opportunities to sell and buy food locally. As of 2014, there were 8,268 farmers’ markets in the United States, up 180 percent since 2007, despite no growth in real farmer-to-consumer (direct) sales between 2007 and 2012. Local food sales may be increasingly indirect, that is through intermediaries rather than farmer-to-consumer. The number of regional food hubs, (enterprises that aggregate locally sourced food to meet wholesale, retail, institutional and even individual demand) has increased almost threefold since 2007, to a total of 302 in 2014. Farm to school programs have multiple objectives, ranging from nutrition education to serving locally-sourced food in school meals. According to the USDA Farm to School Census, 4,322 school districts have farm to school programs, a 430-percent increase since 2007. This chart is found in the ERS report, Trends in U.S. Local and Regional Food Systems: A Report to Congress, AP-068, January 2015.