Prices for WIC foods in California are higher at smaller stores 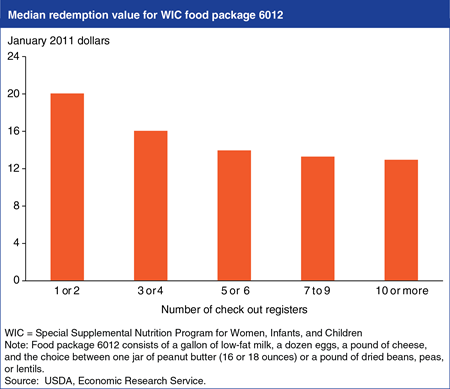 In fiscal 2013, USDA’s Special Supplemental Nutrition Program for Women, Infants, and Children (WIC) served an average of 8.7 million low-income participants per month, with expenditures totaling $6.4 billion. Containing program costs is a continual issue because WIC is funded annually by Congressional appropriations, making the program’s capacity largely dependent on funding levels and costs per participant. In turn, costs per participant depend in part on the prices charged for the WIC foods by WIC-authorized retailers. States are required to authorize an appropriate number and distribution of retailers to ensure adequate participant access to supplemental foods. A recent study found that smaller retailers in California charge higher prices than larger retailers for comparable WIC foods. However, prices did not decrease steadily with increases in store size. Stores with three or four check out registers had lower prices than did the smallest stores, and prices dropped again for stores with five or six registers, but prices were comparable among all stores with at least five registers. This chart is from “WIC Foods Cost More in Smaller Stores” in the September 2014 issue of ERS’s Amber Waves magazine.