Three post-farm industry groups account for about 60 cents of the U.S. food dollar 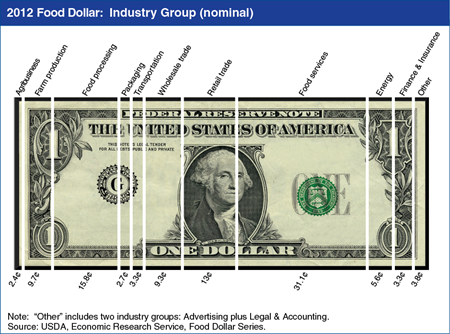 In the United States, 31.1 cents of a typical dollar spent by consumers on domestically–produced food went to pay for services provided by foodservice establishments, 15.8 cents to food processors, and 13 cents to food retailers. ERS uses input-output analysis to calculate the value added, or cost contributions, to the U.S. food dollar from 12 industry groups in the food supply chain—expanded in 2012 to include agribusiness and wholesale trade. Agribusinesses produce products and services used by farmers, such as fertilizers and veterinary services. Wholesale trade companies provide services to all industry groups for the acquisition of products, such as when farmers purchase fertilizers produced by an agribusiness, restaurants purchase takeout containers from a packaging company, and grocery stores purchase produce grown on a U.S. farm. Wholesale trade accounted for 9.3 cents of the 2012 food dollar and agribusiness accounted for 2.4 cents. Previously, wholesaling costs were included with the costs of the industry groups the wholesale companies were servicing, and agribusiness costs were combined with farm production. In 2012, farm production accounted for 9.7 cents of the food dollar. This chart is available for years 1993 to 2012 from ERS’s Food Dollar Series data product updated on May 28, 2014.