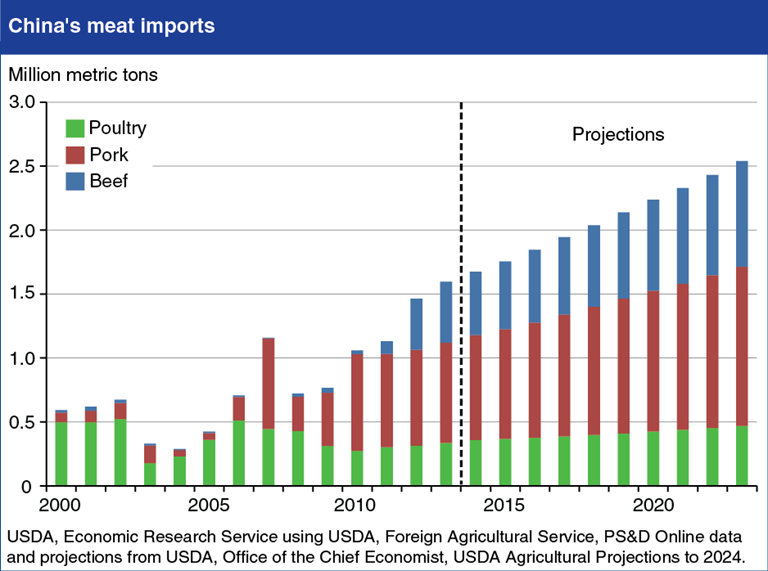 While USDA projects robust increases in China’s meat production and imports of feed grains, China’s meat imports are also projected to rise. Pork imports are projected to show the most growth, rising from about 750,000 tons in 2013 to 1.2 million tons by 2023. The United States, Canada, and European Union are the main suppliers of pork to China. China’s meat consumption is expected to expand at a pace similar to the trend of the past decade. Pork will continue to play a central role in China’s meat economy (China accounts for half of world production and consumption), however, poultry is gaining in popularity, largely because it is cheaper than pork. Restaurants, fast food chains, and cafeterias play a key role in diversifying meat consumption, since many feature specific kinds of meat or chicken. Beef and mutton are important parts of popular ethnic cuisines becoming popular among the broader population. Although China is expected to continue producing most of its own meat, China’s livestock sector is under pressure from rising costs, disease, environmental regulations, and resource constraints, which could lead to China’s meat imports rising even further if production cannot sustain its current pace of growth. Find this chart and more analysis in the April Amber Waves feature article "China in the Next Decade: Rising Meat Demand and Growing Imports of Feed."