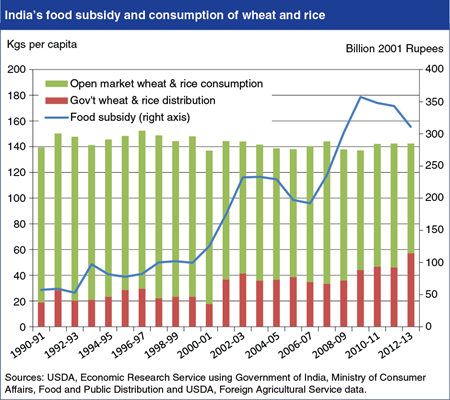 The cost of India’s food subsidy policy has increased significantly since 2000, reaching about $13.5 billion annually in 2011/12 (April/March Indian fiscal year). The rising cost has been driven by higher support prices to farmers, unchanged issue prices for subsidized wheat and rice distributed through the government’s Targeted Public Distribution System (TPDS), and the cost of storing rising stocks. Per capita wheat and rice consumption has changed little, although TPDS grain now accounts for a larger share of consumption, potentially increasing the ability of recipients to buy other foods. Assessments of the TPDS indicate substantial leakages in the delivery of grains that have prevented many households from purchasing their full ration. India’s new National Food Security Act (NFSA), signed into law in September of 2013, aims to expand the share of households eligible for the most preferential subsidized prices and also implement a number of safeguards to improve the distribution of food grains. Whether reforms under the new legislation will have a significant impact on food and nutrition security given the historically poor functioning of distribution programs in a number of Indian states remains uncertain. Find this chart and additional analysis in “India Continues to Grapple with Food Insecurity” in the February 2014 Amber Waves.