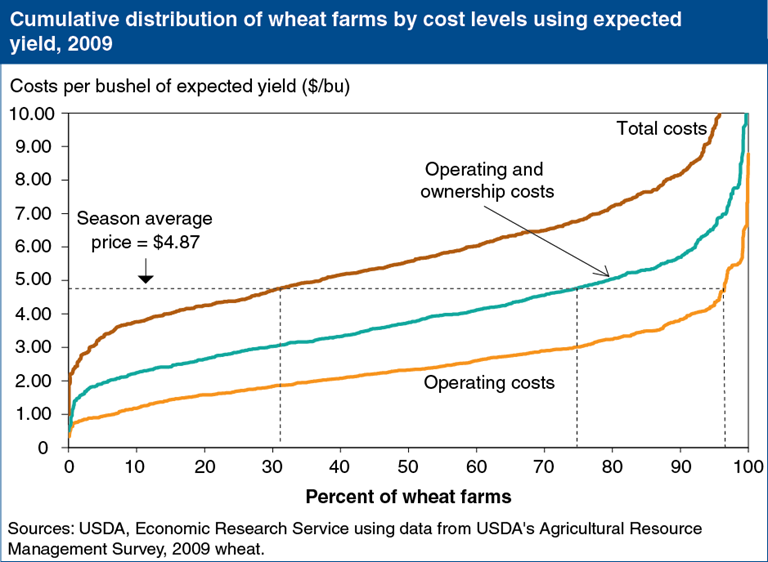 There is wide variation in wheat production costs on U.S. farms based on differences in cropping practices, yields, and costs of land, labor, and capital assets across wheat-producing regions. USDA’s 2009 Agricultural Resource Management Survey found that 97 percent of the country’s farms could have covered all their operating costs (shortrun costs of planting, growing, and harvesting) with the 2009/10 season average price of $4.87 per bushel if they had been able to attain the yields they expected at planting (as reported in the survey). Under the same price and yield assumptions, about 77 percent would have covered both operating and ownership costs (repair costs, annualized depreciation and interest costs, property taxes, and insurance) and 34 percent would have covered total costs (operating and ownership costs, as well as the opportunity costs of unpaid labor and land rental, and general farm overhead). However, during 2009/10, only 79 percent of wheat farms were able to cover their operating costs with the yields they actually harvested. The relatively high share of farmers not covering these shortrun costs is attributed, in part, to yield losses in the Southern Plains, where crops were adversely affected by severe weather during 2009/10. This chart can be found in U.S. Wheat Production Practices, Costs, and Yields: Variations Across Regions, EIB-116.