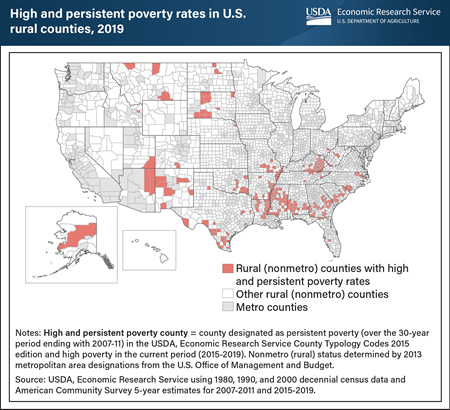 A recent USDA, Economic Research Service study of U.S. poverty identified 310 counties—10 percent of all counties—with high and persistent levels of poverty in 2019. High and persistent poverty counties had poverty rates of 20 percent or more in 1980, 1990, 2000, and on average for 2007-2011 and 2015-2019. Of those 310 counties, 86 percent, or 267 counties, were rural (nonmetro). These rural counties were concentrated in historically poor areas of the Mississippi Delta, Appalachia, the Black Belt, and the southern border regions, as well as on Federal Indian reservations. More than 5 million rural residents, or about 12 percent of the U.S. rural population, lived in counties that had high and persistent poverty rates in 2019. Of those, 1.5 million individuals had incomes below the Federal poverty threshold, accounting for 20 percent of the total rural poor population. Rural residents who identify as Black or African American and American Indian or Alaska Native were particularly vulnerable. Nearly half the rural poor within these groups lived in high and persistent poverty counties in 2019. By comparison, 20 percent of rural poor Hispanics and 12 percent of rural non-Hispanic Whites lived in those counties. This chart appears in the August 2021 Amber Waves finding, Rural Poverty Has Distinct Regional and Racial Patterns.