A USDA, Economic Research Service (ERS) study of poverty in the United States identified 310 counties—10 percent of all U.S. counties—with high and persistent levels of poverty in 2019. Of those, 86 percent or 267 counties were rural (nonmetro). Moreover, those rural counties were concentrated in historically poor areas of the Mississippi Delta, Appalachia, the Black Belt, and the southern border regions, as well as on Native American lands.

In the study, ERS defined counties as being persistently poor if 20 percent or more of their population were living in poverty based on the 1980, 1990, and 2000 censuses and the U.S. Census Bureau’s American Community Survey (ACS) 5-year estimates for 2007-11. Based on this definition, there were 353 persistent poverty counties in the United States in 2011. By combining this list with the most current ACS data (2015-19 ACS 5-year estimates), ERS researchers determined how many persistent poverty counties continued to have high poverty rates in 2019, how many of those were rural counties, and who lived in those counties.

Just more than 5 million rural residents, or about 12 percent of the U.S. rural population, lived in counties that had high and persistent poverty rates in 2019. Of those, 1.5 million were individually poor, accounting for 20 percent of the total rural poor population in the United States.

Living in high and persistent poverty areas presents barriers to well-being for poor and non-poor residents alike, according to ERS researchers whose work in this area is covered in depth on the ERS Rural Poverty & Well-Being topic page. Those barriers include limiting access to medical services, healthy and affordable food, quality education, broadband, and civic engagement opportunities. The longer poverty persists in an area, the more likely it will be that the community may not have adequate support services, private sector disinvestment may take place, social programs may suffer, and the existence of effective social and safety networks may decline. The double exposure phenomenon—the combination of individual poverty and a persistently high poverty rate where the individual resides—can perpetuate poverty from one generation to the next. Opportunities for upward mobility in poor areas are often limited by lack of jobs that pay a living wage, high rates of joblessness and high school noncompletion, and a host of interconnected social issues (such as high rates of crime and teen pregnancy).

Rural residents who identify as Black or African American and American Indian or Alaska Native were particularly vulnerable to the double exposure phenomenon. Nearly half the rural poor within these groups resided in high and persistent poverty counties in 2019. By comparison, 20 percent of rural poor Hispanics and 12 percent of rural non-Hispanic Whites resided in those counties. 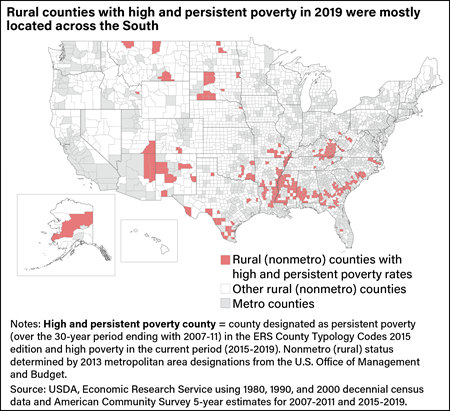