The Meatpacking Industry in Rural America During the COVID-19 Pandemic

The employment dependence of these counties on a single industry makes meatpacking—officially termed animal slaughtering and processing in the North American Industry Classification System (NAICS)—an industry unlike any other in the United States. The uniqueness of the employment concentration of the meatpacking industry (NAICS 3116) can be placed into context by examining the other 85 manufacturing industries categorized at the NAICS four-digit industry level. There are only 91 other counties in the United States where a manufacturing industry accounts for at least 20 percent of County employment. The next highest industry in terms of the number of counties with at least 20 percent of employment in a single industry is motor vehicle parts manufacturing, with only 12 counties, compared with the 56 meatpacking-dependent counties. 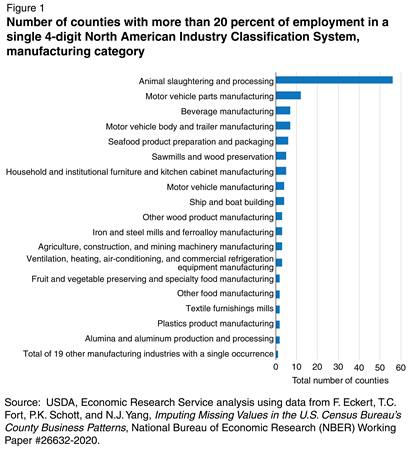 Even before the outbreak of COVID-19, the 49 rural meatpacking-dependent counties were facing a comparatively high prevalence of poverty. ERS defines high-poverty counties as those that have poverty rates of 20 percent or higher, using the 2014–2018 five-year estimates of the American Community Survey. Using this definition, 34.7 percent of these meatpacking-dependent counties were defined as high-poverty counties, compared with 26.2 percent in all other rural counties in the country. 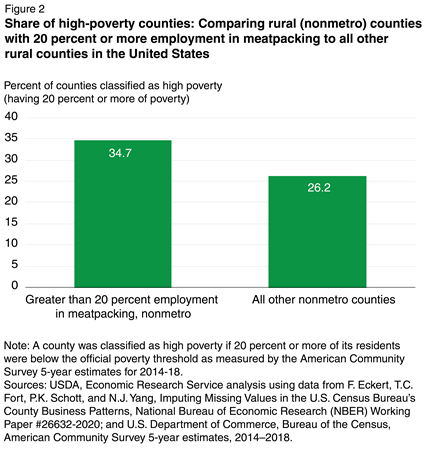 The confirmed number of cases of COVID-19 in these meatpacking-dependent counties has far outpaced those seen in all other counties across the country. 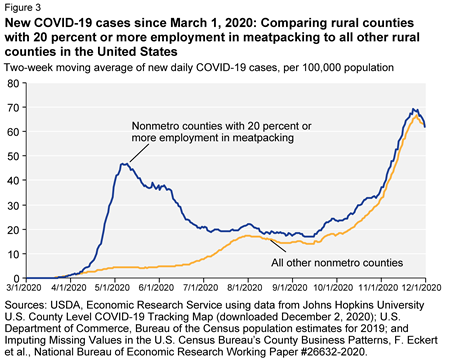