The COVID-19 Pandemic and Rural America

Recent county-level evidence on the prevalence of COVID-19 and local unemployment and employment rates, while no means a complete picture, provides indication of the spread of the virus and ensuing economic recession across the United States (see the note on data sources). The analysis of COVID-19 prevalence presented below focuses on cumulative COVID-19 case rates and not on recent or active cases.

Spread of the Pandemic to Rural America 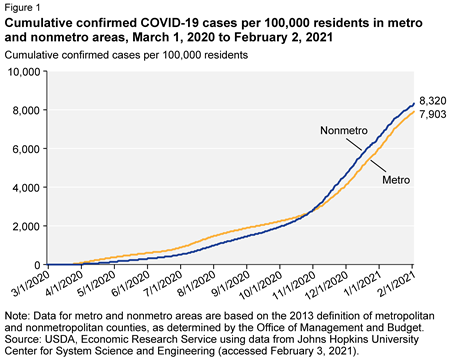 By February 2, the regions with the highest prevalence of COVID-19 cases included much of the Great Plains and parts of the Mountain West, the upper Midwest, the South, Southeast and Southwest. Less affected areas include much of the Northeast, the West Coast, and Hawaii—though many exceptions are evident in these regions. Higher COVID-19 case rates and death rates have been observed in certain subpopulations, such as people confined to prisons and nursing homes, and in many minority populations, including Native Hawaiians/Pacific Islanders, American Indian/Alaska Natives, Hispanics/Latinos, and Blacks/African Americans, according to the COVID Tracking Project. 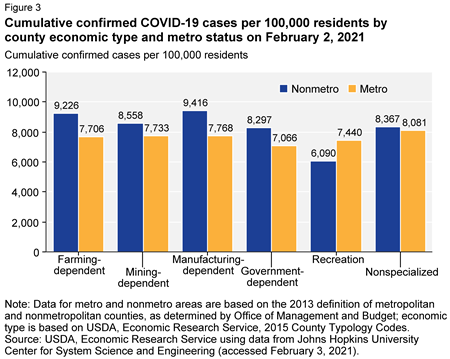 Unemployment and Employment During the Pandemic

After the pandemic started, U.S. unemployment surged to levels not seen since the Great Depression in the 1930s. In March, the unemployment rate began to rise. Monthly unemployment estimates reported by the Bureau of Labor Statistics (BLS) refer to the week that includes the 12th day of each calendar month. By the week including April 12, U.S. unemployment peaked at a seasonally adjusted rate of 14.7 percent. This surge resulted from government restrictions on non-essential economic activity, social distancing requirements, temporary closures of some facilities due to infection concerns, effects of illness on availability of some essential workers, and voluntary decisions by consumers to limit travel and other activities.

The unemployment rate began to decline after April as the Coronavirus Aid, Relief, and Economic Security (CARES) Act, other new Federal laws, and the Federal Reserve made trillions of dollars in funds available as part of efforts to address the recession. Additionally, States relaxed restrictions put in place to control the pandemic. All these resulted in consumers starting to increase spending again. By the week of November 12, the national unemployment rate had fallen to 6.7 percent and remained unchanged in December. In January 2021, the national unemployment rate fell again, to 6.3 percent.

Note: The BLS county-level estimates of employment and unemployment are not seasonally adjusted. 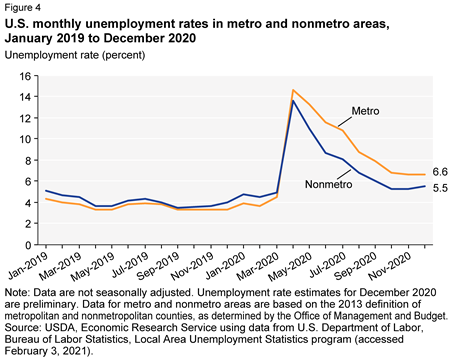 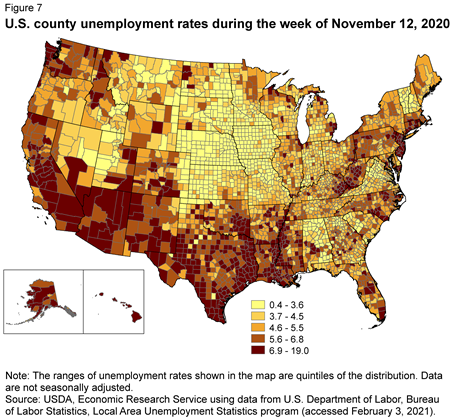 The county-level data on COVID-19 cases are from the Johns Hopkins University Center for Systems Science and Engineering (JHU-CSSE). The number of cases in each county are divided by the 2019 population of the county to compute case rates, using the 2019 U.S. Department of Commerce, Bureau of the Census population estimates. The JHU-CSSE case data are based on case reports provided by the U.S. Centers for Disease Control and Prevention (CDC) and by State and local health departments. Not all cases are assigned to specific counties in the JHU-CSSE data (1.5 percent of total cases were not assigned to specific counties on February 2, 2021); these unassigned cases are not included in the analysis of case rates by metro status or county economic types.