Food wholesaling is a component of food marketing in which goods are assembled, stored, and transported to customers, including retailers, food service operators, other wholesalers, government, and other types of businesses.

There are three basic types of wholesalers, as classified by the Census Bureau's Economic Census: Merchant grocery wholesalers are classified by the Census of Wholesale Trade based on the types of products distributed: 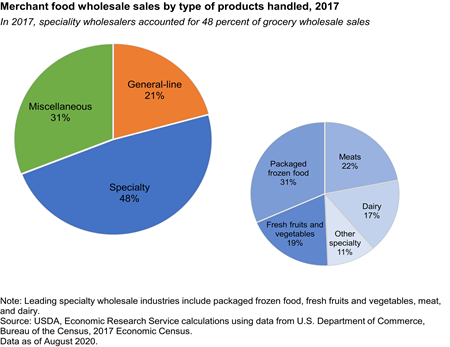 Food wholesaling consists of both retail and food service sales. Some key findings on sales are highlighted below:

Several food wholesalers ranked among the largest privately held companies in the U.S. based on sales volume. According to Forbes’ annual rankings of America’s largest private companies, C&S Wholesale Grocers was tenth, Reyes Holdings was number 12, and Gordon Food Service was number 23. As consolidation in food retailing grew, manufacturers and large retailers offering a broad assortment of items have found it advantageous to negotiate directly with each other, reducing the power and influence of traditional wholesalers. Self-distribution is the preferred method of vertical coordination for large grocery chain stores (those with 11 or more stores). A decline in the number of wholesalers leaves smaller independent grocers (those with 1-10 stores) with fewer options for obtaining their merchandise.

In 2015, Sysco’s planned merger with US Foods (formerly U.S. Foodservice) was dropped after being blocked based on antitrust grounds. Sysco is the largest distributor of grocery items to U.S. food service operations—restaurants, hospitals, cafeterias—based on sales, and US Foods is the second largest food service distributor.