The Nation's 115,857 traditional food stores sold $688 billion of retail food and nonfood products in 2018. Grocery stores, including supermarkets and smaller grocery stores (except convenience stores) accounted for the largest share of store sales (92.2 percent), followed by convenience stores without gasoline (4.5 percent). Specialized food stores, including meat and seafood markets, produce markets, retail bakeries, and candy and nut stores, accounted for the remaining 3.3 percent of the total. 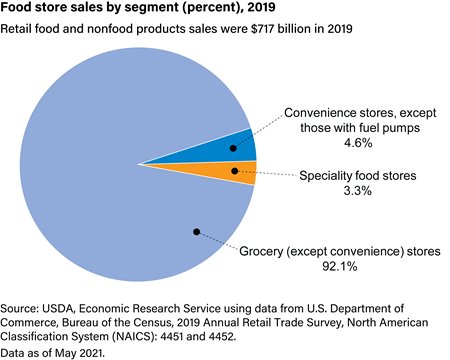 Grocery store (excluding convenience stores) sales increased following the 2007–09 recession—a period of economic uncertainty in which traditional grocery retailers experienced negative inflation-adjusted growth. Since 2010, grocery store sales growth (in current dollars) exceeded the rate of inflation. Inflation-adjusted sales growth from 2010 to 2018 averaged 1.21 percent per year compared with -0.19 percent per year from 2000 to 2009. The slow and negative inflation-adjusted growth in annual sales at traditional grocery stores likely was due in part to increased competition from nontraditional food retailers—such as warehouse clubs, supercenters, drugstores, and other retailers—as many consumers economized on food spending. 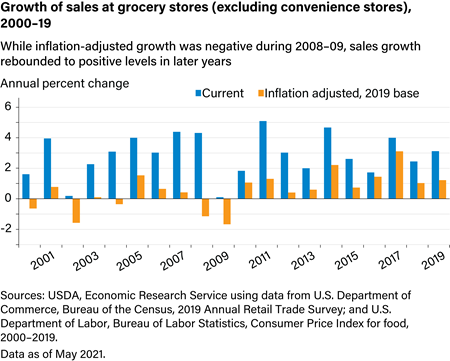 Total U.S. food sales at supermarkets, other grocery (except convenience) stores, warehouse clubs, and supercenters reached $653 billion in 2019 (gray bars). Sales by the 20 largest food retailers totaled $410.4 billion in 2019, accounting for 65.1 percent of total food sales (purple line). This share increased 85.9 percent from 1990 to 2019 (from 35.0 percent to 65.1 percent, respectively). Before and after the Great Recession of 2007–2009, market shares held by the largest 4, 8, and 20 retailers decreased slightly. Since 2012, the longer-term trend of an increasing concentration of sales among the Nation's largest retailers has resumed. This trend continued for the top 4 retailers, although the ratio for the top 20 and top 8 fell slightly in 2018, declining 1.6 and 0.6 percent, respectively.

A contributing factor to these increases over the past decade has been the steady growth of Walmart Supercenters, making Walmart the largest U.S. retailer of grocery products. In comparison, second-place Kroger—the largest traditional grocery retailer—has been a major player in mergers-and-acquisitions activity, acquiring retailers such as Harris Teeter and Roundy's in the last decade. 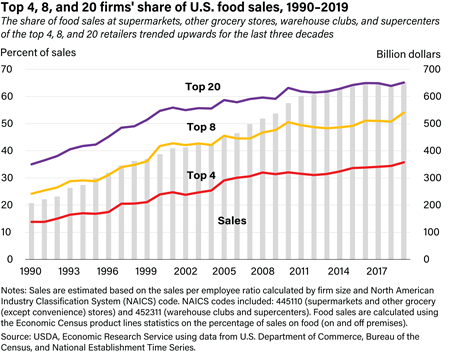 Supermarkets experienced major consolidation and structural change through mergers, acquisitions, divestitures, and internal growth in the mid- to late 1990s. These factors produced increasing shares of the largest 4, 8, and 20 grocery retailers during this period. This vigorous consolidation activity slowed throughout the following decades. Over 300 food industry mergers and acquisitions were recorded in 2019. Some highlights of the last few years include the following: