Crop Insurance at a Glance

Since its inception in the 1930s, the Federal Crop Insurance Program (FCIP) evolved into a key Federal support program for agriculture in the United States. The USDA, Risk Management Agency (RMA) oversees FCIP and offers agricultural producers financial protection against losses due to adverse events including drought, excess moisture, damaging freezes, hail, wind, disease, and price fluctuations. From 2000 to 2020, FCIP offered financial and administrative support for 120 unique agricultural commodities, covering an average of 287 million acres annually (representing an average of 87 percent of all U.S. principal cropland over the past two decades). The rise in insured acreage (as a share of U.S. principal cropland planted acres) since 2014 is primarily due to increases in total insured crop acreage; however this ratio is also elevated slightly due to minor decreases in U.S. principal cropland planted acres in the last few years (principal cropland planted acres were approximately 303 million and 310 million for 2019 and 2020, respectively, compared to an average of approximately 320 million acres from 2010–18).

As of 2020, the aggregate crop coverage level (which tracks the ratio of total insured liability to the total potential liability that participants could insure in the program1) reached an all-time high of 74 percent. As shown in the figure above, increased participation was partly the result of legislative changes over the last three decades including premium subsidies, as well as the introduction of new insurance products. Also, beginning in 2000, RMA introduced a new pricing mechanism known as the continuous rating formula. This mechanism more precisely reflects each producer’s risk of an indemnity and thus results in insurance premiums more tailored to each producer’s unique situation.

1 Potential liability for a given producer can be calculated by taking the producer’s total insured liability and dividing by the producer’s chosen coverage level, which represents the total insured liability if that producer were to insure at a 100 percent coverage level. Summing this metric across all participants in the FCIP for a given year provides a metric for the total liability that could conceivably be insured given the year’s current participants and enrolled acreage.

Increased participation in FCIP has been met with corresponding increases in total liability which, as of 2020, was equivalent to 33 percent of the total U.S. agricultural Gross Domestic Product (GPD). The majority of FCIP liability is attributable to row crops (65 percent of 2020 liability). However, specialty crops also contribute a substantial amount to total liability (24 percent in 2020). Livestock and animal products, forage crops, and all other crops represent a minority of total insured liability. 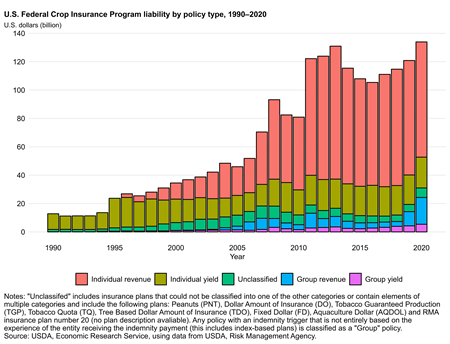 A wide variety of crop insurance products exist, but most can broadly be classified into individual or group-based policies and yield or revenue policies. Individual policies trigger indemnity payments in response to the individual producer’s loss experience, while group policy payments are conditional on a group level index—for example, reduced yields at the county level. Yield-based policies protect against a drop in the quantity of production (i.e., low yields), whereas revenue-based policies guarantee a certain level of production revenue and thus protect against low output prices and/or a drop in the quantity of production. Historically, individual yield-based policies made up most of the insured liability. However, starting in the mid-1990s, individual revenue-based policies gained popularity and represented most of the insured liability for the last decade. Group-based policies have been growing in popularity over the past decade but still represent a relatively small portion of total liability.

Many factors can influence the magnitude of FCIP indemnified losses—including changes in producers’ demand for crop insurance, prevalence of extreme weather events, and changes in crop values over time. Since 2000, annual indemnity payments increased on average by 16.4 percent per year. Although a year-to-year variation exists due to prevailing weather conditions, drought consistently was a leading cause of indemnified losses. Since 2000, 40 percent of total indemnity payments were for losses attributed to drought or high temperature. Excess moisture is also frequently responsible for large indemnities— 28 percent of total indemnity payments since 2000.

Although indemnities have trended upward for the last several decades, the overall actuarial performance of the program has improved. Prior to the mid-1990s, loss ratios, which measure the ratio of total indemnities to total premiums, were often greater than 1.0—indicating that total indemnities were higher than the sum of collected premiums. Following the passage of the Federal Crop Insurance Reform and Department of Agriculture Reauthorization Act of 1994 (Public Law 103–354), the purchase of crop insurance became a mandatory condition for maintaining eligibility for various benefit programs (including price support programs). This version of the mandatory participation requirement was repealed in 1996. However, a stipulation remained that required farmers who accepted disaster benefits to purchase crop insurance to maintain eligibility for future benefit programs. These legislative changes, along with increases in premium subsidies, helped increase crop insurance participation (and in turn, create a more diversified risk pool). Since 1994, annual loss ratios averaged 0.85, indicating that average annual indemnities total about 85 percent of total premiums.

The total cost of maintaining FCIP has also increased with program participation. Premium subsidies, which have historically been the primary policy tool to increase program participation, represent the largest share of total program cost. Premium subsidies totaled just under $7 billion for 2020. In addition, FCIP incurs other costs due to its public-private partnership structure which is defined via the Standard Reinsurance Agreement (SRA). SRA defines a financial agreement between private insurance companies (formally known as Approved Insurance Providers (AIPs)) and the Federal Government. Under SRA, AIPs sell and service the insurance policies while the Federal Government subsidizes both producers’ purchases and AIPs’ administrative and operating expenses. In 2020, the cost of the program delivery was $1.68 billion and $1.4 billion was paid as administrative costs and underwriting gains to AIPs. Total FCIP outlays (the sum of premium subsidies, program delivery costs, and underwriting gains) for 2011–20 averaged $9.67 billion, which is a notable increase compared to the prior decade’s average (direct costs averaged $5.44 billion for 2001–10).