Genetically engineered (GE) seed varieties were commercially introduced in the United States in 1996. Adoption rates for these crops increased rapidly in the years that followed. Currently, over 90 percent of U.S. corn, upland cotton, soybeans, canola, and sugarbeets are produced using GE varieties.

Herbicide-tolerant (HT) crops tolerate specific broad-spectrum herbicides (such as glyphosate, glufosinate, and dicamba). Insect-resistant crops contain a gene from the soil bacterium Bacillus thuringiensis (Bt) that produces an insecticidal protein. Although other GE traits have been developed (such as virus and fungus resistance, drought resistance, and enhanced protein, oil, or vitamin content), HT and Bt traits are the most commonly used in U.S. crop production. While HT seeds are also widely used in alfalfa, canola, and sugarbeet production, most GE acres are planted to three major field crops: corn, cotton, and soybeans. 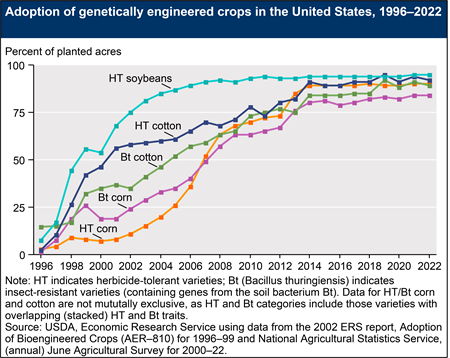 See Adoption of Genetically Engineered Crops in the U.S., a data product on the ERS website, for more information. For a summary of recent trends, see chapter 2 in Agricultural Resources and Environmental Indicators, 2019 (EIB-208, May 2019).

Though GE seeds tend to be more expensive than conventional ones, planting them tends to increase crop yields, lower pesticide costs, and/or provide time and labor savings. The impacts of GE crops vary by crop, year, and location. Bt crops tend to have higher yields than non-Bt crops when insect pests are present. Insecticide costs also tend to be lower on fields where Bt crops are planted. Planting HT crops provides a simplified approach to weed management decisions, which can lead to time and labor savings. The adoption of HT crops and the related broad-spectrum herbicides, such as glyphosate, also facilitates the adoption of conservation tillage. However, large increases in glyphosate use have recently led to the development of glyphosate-resistant weed populations. The spread of resistant weed populations has the potential to erode the benefits associated with HT production systems by increasing tillage and alternative herbicide use. The use of broad-spectrum herbicides also has the potential to damage non-GE crops through pesticide drift.

ERS conducts research on a number of agricultural biotechnology issues, including:

A book from the National Research Council titled The Impact of Genetically Engineered Crops on Farm Sustainability in the United States (2010) is a comprehensive assessment of the environmental, economic, and social impacts of the GE-crop revolution on U.S. farms.