Farm real estate—including land and structures—is forecast to account for about four-fifths of the total value of U.S. farm assets in 2020. (See more on farm assets and debt, including real estate.) USDA's annual June Area Survey indicates that farmland values began rising in 1988 and, except for single-year declines in 2009 and 2016, have continued rising. After adjusting historical data for inflation, however, farmland values did not begin to increase until 1993, and between 2016 and 2020 were 1.3 percent below their 2016 level on average. To recognize the impact of changes in the purchasing power of the dollar, all value-based comparisons that appear below use inflation-adjusted historical data. There is a regional variation in both farmland value levels and growth trends. The USDA Economic Research Service studies trends in farmland values, assessing the impact of both macroeconomic factors (such as interest rates and the prices of alternative investments) and parcel-specific attributes (such as soil quality, government payments, rural amenity value and urban proximity). U.S. farmland values remained high in 2020, averaging $3,160 per acre, a small decrease of 0.8 percent compared with 2019. At the same time, farm income was forecast to increase nationwide in 2020 (see Farm Income and Wealth Statistics for details). This, combined with historically low interest rates, contributes to the ability of the farm sector to support farmland values. 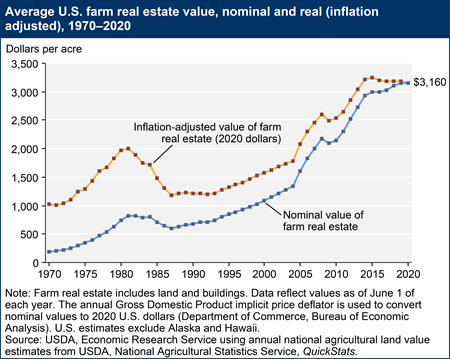 Farmland real estate values vary according to agricultural use. Cropland maintains a premium over pastureland due to mostly higher per-acre returns to crop production. Between 2019 and 2020, U.S. average cropland and pastureland values both fell by 0.8 percent, to $4,100 and $1,400 per acre, respectively.