The Federal estate tax has applied to the transfer of property at death since 1916, as part of a unified system of transfer taxes. Although the tax policy has been amended many times, the estate tax, the gift tax—imposed upon transfers before a person's death—and generation-skipping transfer tax have never directly affected a large percentage of taxpayers. Under the current Federal estate tax system, individuals can transfer up to a specified amount in money and other property without incurring Federal estate tax liability. When property is transferred at death, it is generally the responsibility of the estate to pay any taxes due as a result of the transfer unless other arrangements for payment are made. Under present law, the estate of a decedent who, at death, owns assets in excess of the estate tax exemption amount—or $11.7 million in 2021—must file a Federal estate tax return. However, only those returns that have a taxable estate above the exempt amount after deductions for expenses, debts, and bequests to a surviving spouse or charity are subject to tax at the highest maximum tax rate of 40 percent (see the table below on exemption amounts and tax rates).

Over the years, some targeted provisions have been enacted to reduce the estate tax owed by farms and small business owners. These include a special provision allowing farm real estate to be valued at farm-use value rather than at fair-market value and an installment payment provision. A provision aimed at encouraging farmers and other landowners to donate an easement or other restriction on development has also provided additional estate tax savings. Together, these provisions have reduced the potential impact of estate taxes on the transfer of a farm or other small business to the next generation.

The Economic Growth and Taxpayer Relief Reconciliation Act of 2001 ("the 2001 Act") provided estate tax relief to farmers and other small business owners. The 2001 Act reduced Federal estate and gift tax rates and substantially increased the amount of property that can be transferred to the next generation without incurring Federal estate tax, culminating in the tax's complete repeal in 2010—so persons dying in 2010 owed no estate tax under the 2001 Act.

In addition to repealing the estate tax, the 2001 Act changed the treatment of unrealized gains at death, effective with estate tax repeal in 2010. Prior to 2010, the basis—which is the value used to determine gain/loss of assets acquired from a decedent—was stepped up to the estate's fair market value at the date of death. This "step-up in basis" rule essentially eliminated the recognition of income on the appreciation of the property that occurred before the property owner's death. Upon repeal of the estate tax in 2010, however, the step-up in basis rule was replaced with a modified carryover of the decedent's basis, with an adjustment amount of up to $1.3 million—plus an additional $3 million for transfers to a surviving spouse. This change added to the compliance burden since it was necessary to determine the basis of inherited assets. In farming, these assets may have been held for several decades with limited documentation on their original cost or the method in which they were acquired.

The Tax Relief, Unemployment Insurance Reauthorization, and Job Creation Act of 2010 ("the 2010 Act"), extended and augmented the expiring provisions of the 2001 Act. Instead of allowing for the full repeal as planned in 2010, the law retroactively set a new tax exemption amount at $5 million for an individual, and a maximum estate and gift tax rate of 35 percent, effective for 2010. The 2010 Act also reinstated the step-up in basis rule. Although most estates will owe fewer taxes under the $5 million and stepped-up basis provisions, some very large estates would owe less tax under the repeal and carryover basis provisions that applied under the original 2001 legislation. For deaths occurring in 2010, the law provided an election allowing the estate to be treated under the 2001 law in which the estate tax was eliminated and the modified carryover basis rules applied. Also, the 2010 Act provides a decedent of an estate who is survived by a spouse the ability to make a "portability election." A "portability election" allows the surviving spouse to apply the decedent's unused tax exemption amount to the surviving spouse’s own estate transfers during life and at the surviving spouse’s own death.

The American Taxpayer Relief Act of 2012 ("ATRA 2012") made permanent the estate tax provisions in the 2001 Act and subsequently modified by the aforementioned 2010 Tax Relief Act. The ATRA 2012 permanent provisions also included a unified exemption for estate and gift tax purposes of $5 million, indexed for inflation after 2011 ($5.45 million for 2016), a statutory maximum estate and gift tax rate of 40 percent, and the portability election of the exemption between spouses, allowing a decedent to elect to permit the surviving spouse to claim any unused exemption amount.

The Tax Cuts and Jobs Act (TCJA), passed in December 2017, approximately doubles the previous estate tax exemption amount to $11.18 million per individual and keeps the 40 percent maximum marginal rate for 2018. The new exemption amount is temporary and applies to decedents dying or gifts made after December 31, 2017, and before January 1, 2026. After December 31, 2025, the exemption amount returns to $5 million but will be adjusted for inflation. The TCJA maintains previous law by allowing the basis in the property acquired from a decedent to be stepped-up to the value of the asset at the date of death, just as it was under previous estate tax law. This "step-up in basis" rule essentially eliminates any capital gains tax liability for the appreciation of the property that occurred prior to the property owner’s death. The maintenance of the rule is significant for at least two reasons. First, the step-up in basis rule can reduce the amount of capital gains tax an heir will owe. The amount of tax owed by heirs if and when they sell the asset would be calculated based on when they inherited it rather than when it was originally acquired. Second, research suggests much of the appreciation in the value of assets in the estate has never been taxed—either as income or capital gains—and thus will escape taxation completely.

For 2021, ERS estimated 35,683 estates would result from principal operator deaths, and out of those, 0.70 percent—or 248 estates—would be required to file an estate tax return, and only 0.20 percent of the 35,683 farm estates would have an estate-tax liability. The estate tax forecasts are based on simulations using the latest available farm-level survey data (USDA's 2020 Agricultural Resource Management Survey), assets and debt forecasts from the USDA-ERS Farm Sector Income and Finances forecast, mortality rates from the Social Security Administration, interest rate data from the Farm Credit System, and cash rental rates for farmland from the 2021 USDA-NASS June Area Survey. The farm estate forecast based on 2020 ARMS data alone may be an undercount of total farm estates created because ARMS does not collect wealth information on non-spousal farm operators. About 14 percent of farm operations contain additional non-spousal farm operators.

Total aggregate Federal estate tax liabilities from principal operator farm estates in 2021 are forecast to be $246 million. The tax liability forecast accounts for adjustments, deductions, and exemptions, including the special-use valuation provision that is available to farm estates and the portability provision available to surviving spouses. The special-use valuation provision reduction in value for 2021 was capped at $1.19 million. 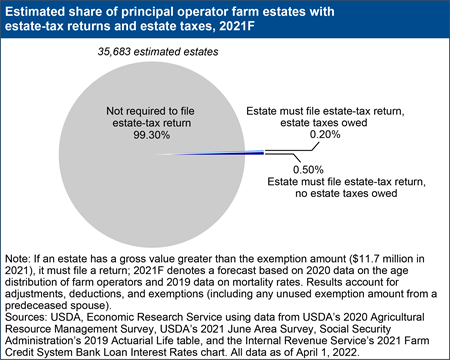 The special-use valuation provision allows farm real estate to be valued at farm-use value rather than at its fair-market value, and there is also an installment payment provision. We forecast the special-use valuation provision provided $25.4 million in estate tax savings in 2021. A separate provision aimed at encouraging farmers and other landowners to donate an easement or other restriction on development has also provided additional estate tax savings. However, we do not have enough information from the data to include these donation/restriction provisions in our estimates.

Documentation for the Estate Tax Model

The following documentation defines the Federal estate tax model for farm households. Estate tax is a tax on the transfer of property at death. Model documentation includes a description of data sources, assumptions, and estimation methods.

This section broadly explains the estimation of estate tax components for farm households. The exemptions, limits, tax rates, special deductions, and other elements of the model are based on the Federal estate tax code (Chapter 11 of the Internal Revenue Code) for the relevant year. For more technical details of the model, see Appendix C of Estimated Effects of the Tax Cuts and Jobs Act on Farms and Farm Households (ERR-252, June 2018).

We make two important assumptions when estimating the estate tax liabilities that rely on estate heirs’ motivation to maximize consumption over their lifetime. There may be instances and exceptions for which heirs are otherwise motivated. The assumptions include:

For some cases we forecast estate taxes using ARMS data from the previous year—for example, estimating 2021 estates taxes using 2020 data. For these cases, we inflated the assets and net-worth values simultaneously to avoid capturing the inflation value twice in net worth. These inflated forecasts have been consistent with predicted changes in the most recent USDA-ERS Farm Sector Income and Finances forecast. The implicit assumption is that assets and net worth for all individuals in our sample will change by the same percentage.

According to the provisions of the tax code, estates are required to file a tax return only in cases where the gross estate value exceeds the estate tax exemption for that year (e.g., $11.7 million for an individual in 2021, an amount indexed for inflation). When forecasting estate taxes using ARMS data from a previous year, since we don't know which farmers died during the year, we use the expected value of the estate created—i.e., the probability that an estate is created times its estate value. If the expected gross value of an estate is above the exemption limit, then the model assumes a return is required for the estate. Summing the probabilities across all estates with an expected value above the exemption provides the estimated number of estate tax returns by farmers.

Qualifying farm estates can reduce the value of their estate using the SUV provision. To qualify for SUV, the farm estate must pass two tests:

A farm estate that passes both tests can substitute the value of the property dedicated to its actual use, rather than its fair market value based on potential use, up to the stipulated maximum amount. The SUV is computed using cash rents, farm bank loan interest rates, and farm property taxes under the formula found in Section 2032A of the IRS Tax Code.

Updates and Revisions to the Model

The current version of the estate tax model for farm households contains changes that are likely to result in differences among the estimated variables relative to estimates published before 2016 that were obtained using the original model. The most notable changes to the original model are: