ERS provides information on a range of farm labor issues, including:

Finally, we provide links to key data sources with summaries.

Size and Composition of the U.S. Agricultural Workforce

The U.S. agricultural workforce has long consisted of a mixture of self-employed farm operators and their family members, and hired workers. Both types of employment were in long term decline from 1950 to 1990, as rising agricultural productivity due to mechanization reduced the need for labor, but employment levels have stabilized since 1990.

The reduction in self-employed and family labor through 1990 was more rapid than the decline in hired labor. According to data from the National Agricultural Statistical Service's (NASS) Farm Labor Survey (FLS), the number of self-employed and family farmworkers declined from 7.60 million in 1950 to 2.01 million in 1990, a 74-percent reduction. Over this same period, average annual employment of hired farmworkers—including on-farm support personnel and those who work for farm labor contractors—declined from 2.33 million to 1.15 million, a 51-percent reduction. As a result, the proportion of hired workers has increased over time. 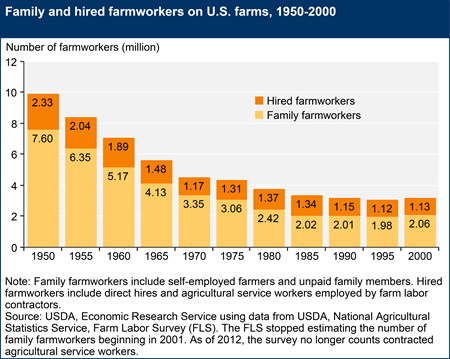 The rest of this page describes the employment, earnings, demographic characteristics, and other information for the hired farm labor force only. (Information on the well-being of the self-employed farmers and their families may be found on the ERS topic page on Farm Household Well-being.)

Hired farmworkers make up less than 1 percent of all U.S. wage and salary workers, but they play an essential role in U.S. agriculture. According to data from the 2017 Census of Agriculture, wages and salaries plus contract labor costs represented 12 percent of production expenses for all farms, but as much as 43 percent on greenhouse and nursery operations, and 39 percent for fruits and tree nuts.

Large numbers of hired farmworkers are Hispanic immigrants, and many lack authorization to work legally in the United States. In recent years, farmworkers have become more settled, with fewer migrating long distances from home to work, and fewer pursuing traditional seasonal follow-the-crop migration. The number of young, recent immigrants working in agriculture has also fallen, and as a result the farm workforce is aging. Over the past 30 years, wages for hired farmworkers have gradually risen, both in real terms and in relation to wages for the average nonsupervisory worker in a nonfarm occupation.

Hired farmworkers are employed in both metro (urban) and nonmetro (rural) areas. The statistics presented here refer to farmworkers nationwide, unless otherwise indicated.

Recent Trends in the Employment of Hired Farmworkers

According to data from the Quarterly Census of Employment and Wages (QCEW), wage and salary employment in agriculture—including those in support industries such as farm labor contracting—stabilized in the 2000s, and has been on a gradual upward trend since 2010, rising from 1.07 million in 2010 to 1.18 million in 2018, a gain of 11 percent.

Growth has been fastest in the livestock sector (which added 39,000 jobs, a 17 percent increase, between 2010 and 2018) and in crop support services (which added 51,000 jobs, or 18 percent). It should be noted that the QCEW is based on unemployment insurance records, not surveys of farms or households. As a result, it does not cover smaller farm employers in those states that exempt them from participation in the unemployment insurance system. However, survey data sources, such as the American Community Survey and the Current Population Survey, also find rising farm employment since the turn of the century.

Demographic information on farmworkers can be found in the American Community Survey (ACS) from the U.S. Census Bureau. These data also allow us to distinguish among manual laborers, managers/supervisors, and other occupations in the industry. Farm laborers are considerably less well educated, more likely to be Hispanic of Mexican origin, and less likely to be citizens than are workers in other occupations in agriculture, or than the U.S. wage and salary workforce as a whole.

Differences in demographics are also evident between crop and livestock workers (not shown in table). A larger share of laborers in crops and related support industries are female (27 percent versus 22 percent in livestock). Crop laborers are also less likely to be non-Hispanic whites (24 percent versus 54 percent for livestock), and less likely to be born in the United States (40 percent for crop workers in manual labor occupations versus 64 percent for manual livestock workers). Finally, crop laborers are somewhat less well educated: 58 percent lack a high school degree, compared to 40 percent in livestock.

Notably, the National Agricultural Workers Survey (NAWS), discussed below, finds larger shares of foreign-born, Hispanic, and poorly educated employees among crop and support workers than does the ACS (livestock workers are not surveyed in NAWS). For example, NAWS estimates that in FY2015-16 just 25 percent of crop farm workers in manual labor occupations were U.S. born, compared to 40 percent in the ACS.

The Hired Farm Workforce Is Aging

Women Are an Increasing Share of the Hired Farm Workforce

The share of farmworkers who are women declined in 2006-09, from 20.3 percent to 18.6 percent, but has since climbed to 25.4 percent (in 2017). The fact that the female share fell during the Great Recession and has risen during the recovery is consistent with men moving into agriculture as employment in the nonfarm economy declines, and out of agriculture as nonfarm job prospects improve. The rising female share is also consistent with the fact that, as labor costs rise, some growers are adopting mechanical aids (such as hydraulic platforms that replace ladders in tree-fruit harvesting, and mobile conveyor belts that reduce the distance heavy loads must be carried) which permit more women and older workers to perform tasks that were traditionally performed largely by younger men.

Geographic Distribution of Hired Farmworkers (By Place of Residence)

Despite agriculture's rural nature, 60 percent of hired farmworkers reside in metro (urban) counties. This largely reflects the fact that most of the main farming areas in California, Arizona, and other Western States lie in large counties that also include major cities, and so are defined as metropolitan. Significant numbers of farmworkers are also found in metro counties in the Great Lakes States (East North Central division) and in the South Atlantic. According to data from NASS' Farm Labor Survey (FLS), real (inflation-adjusted) wages for nonsupervisory crop and livestock workers (excluding contract labor) rose at an average annual rate of 1.1 percent per year between 1990 and 2018. In the past 5 years, however, real farm wages have been growing at 2.0 percent per year, consistent with growers' reports that workers are harder than usual to find.

In 1990, the average real farm wage for nonsupervisory crop and livestock workers was just over half the average wage in the nonfarm economy for private-sector nonsupervisory occupations ($9.62 versus $19.06). By 2018, the farm wage ($13.25) was equal to 58 percent of the nonfarm wage ($22.71). In others words, the gap between farm and nonfarm wages is slowly shrinking, but still substantial.

Although farm wages are rising in nominal and real terms, the impact of these rising costs on farmers' incomes have been offset by rising productivity and/or output prices. As a result, labor costs as a share of gross cash income do not show an upward trend for the industry as a whole over the past 20 years. For all farms, labor costs (including contract labor, and cash fringe benefit costs) averaged 10.4 percent of gross cash income during 2016-18, compared to 10.6-10.7 percent for 1996-98.

However, these trends in labor cost shares differ by commodity. Labor cost shares have actually fallen slightly over the past 20 years for the more labor-intensive fruit and vegetable sectors, although they appear to be trending upwards again in the past few years. On dairies and in nursery operations, both of which also rely heavily on immigrant labor, labor costs as a share of income are at or near their 20-year highs.

The H-2A Temporary Agricultural Program—often called the H-2A visa program—provides a legal means to bring foreign-born workers to the United States to perform seasonal farm labor on a temporary basis, for a period of up to 10 months. Crop farmers can use this program to meet their seasonal labor needs, but most livestock producers, such as ranches, dairies, and hog and poultry operations, are not able to use the program to meet their year-round labor needs. An exception is made for producers of livestock on the range, such as sheep and goat operations, who can use H-2A workers year-round.

Employers must demonstrate, and the U.S. Department of Labor must certify, that efforts to recruit U.S. workers were not successful. Employers must also pay a State-specific minimum wage, which may not be lower than the average wage for crop and livestock workers surveyed by NASS in the FLS in that region in the prior year, known as the Adverse Effect Wage Rate (AEWR). (See the next section for details on the AEWR.) In addition, employers must provide housing for their H-2A workers, and pay for their domestic and international transportation.

H-2A employers must provide transportation and housing and pay the higher of the applicable State or federal minimum wage, the prevailing wage in that region and occupation, as determined by the U.S. Department of Labor, or the regional average farm wage observed in the NASS FLS. The latter is known as the Adverse Effect Wage Rate, reflecting the legal requirement that H-2A employment should not negatively affect domestic farmworkers by lowering the average wage. For fiscal 2019, this minimum hourly wage ranged from $11.13 (in Alabama, Georgia, and South Carolina) to $15.03 (in Oregon and Washington).

Legal immigration status is difficult to measure: not many surveys ask the question, and unauthorized respondents may be reluctant to answer truthfully if asked. Yet the National Agricultural Workers Survey (NAWS) is believed to provide high-quality data on farmworkers' legal immigration status, using trained and trusted enumerators who conduct face-to-face interviews with workers at their job sites, and with their employer's permission. NAWS also queries workers on their inter- and intranational migration patterns. One limitation of the NAWS, however is that it excludes the growing number of H-2A workers, as well as all hired livestock workers.

The share of hired crop farmworkers who were not legally authorized to work in the United States grew from roughly 14 percent in 1989-91 to almost 55 percent in 1999-2001; in recent years it has been just under 50 percent. In 2014-16, 27 percent of crop farmworkers were U.S. born, 4 percent were immigrants who had obtained U.S. citizenship, 21 percent were other authorized immigrants (primarily lawful permanent residents, or green-card holders), and the remaining 48 percent were not work-authorized. The share of workers who are U.S. born is highest in the Midwest, while the share who are unauthorized is highest in California. More than 80 percent of hired crop farmworkers are not migrant workers, but are considered settled, meaning they work at a single location within 75 miles of their home. This number is up from 41 percent in 1996-98, reflecting a profound change in the nature of the crop farm workforce.

Among the small share of remaining migrant workers, the largest group are "shuttlers," who work at a single farm location more than 75 miles from home, and may cross an international border to get there. They made up about 10 percent of hired crop farmworkers in 2014-16, down from about 24 percent in 1996-98.

More common in the past, the "follow the crop" migrant farmworker, who moves from State to State working on different crops as the seasons advance, is now a relative rarity. These workers made up just 5 percent of those surveyed by the NAWS in 2014-16, down from a high of 14 percent in 1992-94.

The final category in the figure are the newcomers to farming, whose migration patterns have not yet been established. The fact that they now represent just 3 percent of the crop farm workforce, down from as much as 22 percent in 1998-2000, in part reflects the slowdown in net migration from Mexico to the United States since 2007. From the U.S. Department of Agriculture: