In 2015, USDA surveyed farm operators about their household’s health insurance coverage as part of the annual Agricultural Resource Management Survey (ARMS). The 2015 survey is the most recent source of data on this topic; insurance coverage data were previously included in ARMS in 2011. To see detailed tables with data from all available ARMS surveys, see the section on "Health Insurance Coverage" in the Farm Household Income and Characteristics data product.

Because medical care is expensive and often essential for maintaining one's health, the incidence of health insurance coverage among populations is an important indicator of their well-being. As with U.S. households in general, a major risk facing farm households is illness or injury to household members, with associated medical expenses incurred in response to an illness capable of draining household resources. Health insurance provides individuals or groups with at least partial reimbursement for covered medical expenses in return for an upfront periodic fee. Health insurance coverage also indicates how much health-related financial risk a household bears. In 2015, 9.1 percent of the U.S. population had no form of health insurance. In comparison, 10.7 percent of farm household members lacked health insurance, indicating that they faced slightly higher health-related financial risks than the general population. 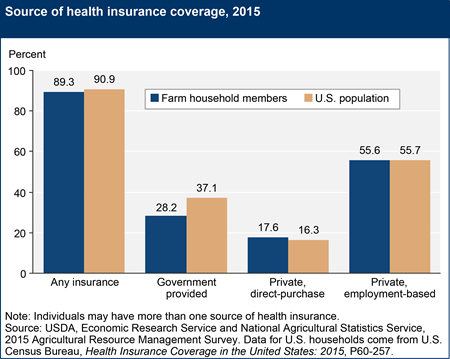 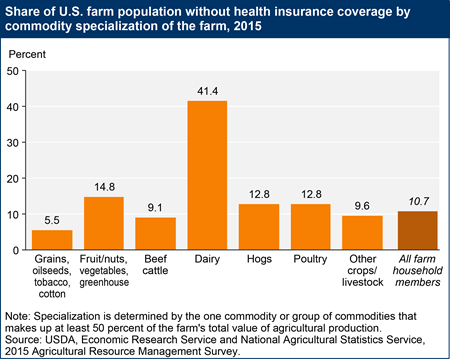