Russian 2022/23 Production and Exports Forecast at a Record

Russia has continued to increase its role in international wheat markets over the years. Since 2012/13, Russia has more than doubled its production through increasing area and yields. In 2022/23, Russia is projected to produce 91 million metric tons (MMT) and export 42 MMT, both records. Russia gained competitiveness on the global market by being able to supply low-cost wheat to price-sensitive markets in the Middle East and North Africa. Despite its recent reoccurring export restrictions (tax and quota), Russia’s exports have more than tripled since 2012/13. While the initial pace of Russian exports has been slow in the current marketing year, its export tax and domestic prices declined in August, making its supplies more competitive with other major exporters. 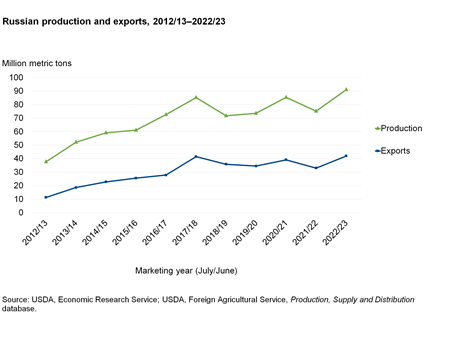