Examining the eating patterns of the U.S. population is a key factor in better understanding the determinants of the dietary intake and health status of Americans. An analysis of the time that Americans spend in various activities—and, in particular, food-related activity—may provide some insight into why nutrition and health outcomes vary across different segments of the population. Such insights could help improve programs and policies targeted at reducing obesity and improving diet quality.

On an average day in 2016, Americans age 15 and older spent 63.6 minutes eating and drinking as a primary or main activity, and 17.2 minutes eating as a secondary activity—that is, while engaged in another activity such as watching television, driving, preparing meals, or working. On an average day, men spent more time engaged in primary eating and drinking (64.4 minutes) than women (62.9 minutes); however, women spent more time engaged in secondary eating (17.5 minutes) than men (16.8 minutes). About 64 percent of Americans reported drinking beverages other than plain water while engaged in other activities in the previous day; of those, 38 percent reported that at least one of those beverages was a soft drink such as cola, root beer, or ginger ale. On average, those who consumed soft drinks while multi-tasking had a higher average body mass index (BMI) and were more likely to report being in fair or poor health than those who did not consume soft drinks.

Over two-thirds of Americans age 18 and older reported that they were their household's usual grocery shopper or that they split this task equally with other household members. Among these individuals, the top 2 places where they obtained the majority of their groceries were grocery stores (68 percent) and supercenters such as Walmart or Target (24 percent). The top 3 primary reasons for shopping at these places are as follows:

Over two-thirds of Americans age 18 and older reported that they were their household’s usual meal preparer or that they split this task equally with other household members. Among these individuals: 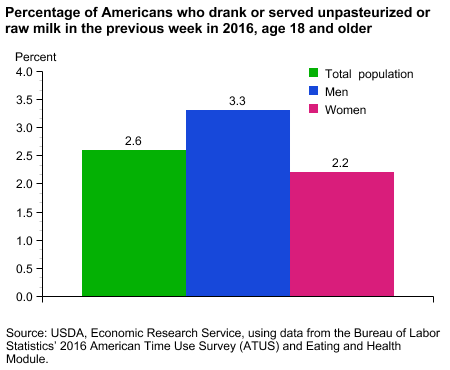 On an average day, participants in the Supplemental Nutrition Assistance Program (SNAP), participants in the Special Supplemental Nutrition Program for Women, Infants, and Children (WIC), and low-income individuals (those with household income less than 185 percent of the poverty threshold) all spent more time preparing food and cleaning up (about 53 minutes) than others with higher household incomes or not participating in SNAP or WIC (about 35 minutes).

For more information about using the data, see:

Findings for the 2014-16 EH Modules are available in pdf format:

Findings for the 2006-08 EH Modules are available in pdf format: