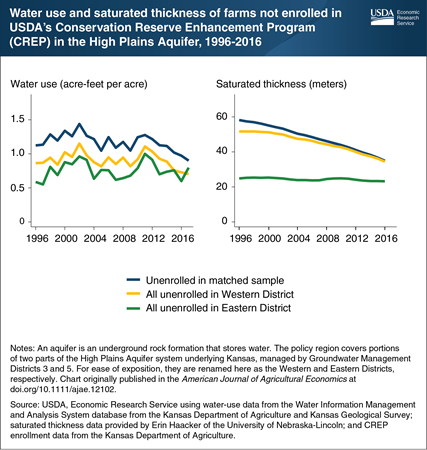 Agriculture in the semi-arid region overlying the High Plains Aquifer, which spans parts of eight states, relies on groundwater. In several areas, significantly more groundwater is extracted than is returned to the aquifer each year, leading to declining water levels. In Kansas, USDA’s Conservation Reserve Enhancement Program (CREP) specifically focuses on retiring irrigated cropland to reduce stress on limited water resources. To represent the amount of water that retired rights would have used in the absence of CREP, in effect the amount of use reduced by the program, ERS researchers used a group of 98 unenrolled farmers similar to 98 enrolled farmers based on factors like farm size, crops grown, and soil quality. Trends of unenrolled matched farmers are largely representative of the average unenrolled farmer in the Western District, where most enrollments have occurred, and which has experienced the most significant aquifer depletion. From 1996 to 2017, unenrolled matched farmers decreased their water use by 0.94 percent a year relative to 1996 levels, compared to 0.64 percent a year for the average unenrolled farmer in the Western District. Furthermore, although unenrolled matched farmers initially experienced more rapid depletion, declines in saturated thickness have been very similar for the two groups since 2008. This chart appears in the October 2020 Amber Waves feature, “Incentives to Retire Water Rights Have Reduced Stress on the High Plains Aquifer.”