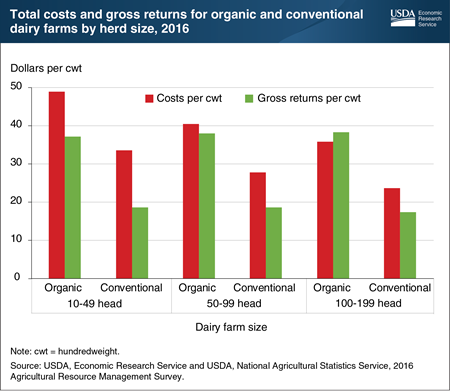 Organic dairy production costs were substantially higher than those for conventional dairy in 2016—about 50 percent higher per hundredweight (cwt) of milk produced. Production costs include operating costs for feed, energy, and bedding, as well as the costs of capital and of the paid and/or family labor provided to the farm. Organic production costs were highest among farms with 10-49 cows at $48.87 per cwt, while production costs on conventional farms of that size were $33.54. Among farms with 100-199 cows in the herd, organic production costs amounted to $35.82 per cwt, while conventional farms in that category reported lower costs of $23.68. However, organic operations received much higher prices for their milk—organic gross returns per cwt of milk produced were about twice the gross returns realized by comparably sized conventional operations in 2016. With higher costs, but much higher gross returns, small organic dairy farms realized higher net returns on average than small conventional farms. (Net returns are the difference between gross returns and costs.) This chart appears in the Economic Research Service report, Consolidation in U.S. Dairy Farming, released July 2020. It also appears in the September 2020 Amber Waves finding, “Organic Dairy Farms Realized Both Higher Costs and Higher Gross and Net Returns Than Conventional Dairy Farms.”