Dairy farms in the United States have faced persistent economic pressures, which have been particularly acute for small commercial farms with 10-199 milk cows. The number of such farms fell by 37 percent between 2007 and 2017, according to USDA’s Census of Agriculture, and more have left the industry since. Milk production has shifted to much larger farms (with 1,000 cows or more), which realize much lower costs on average than smaller farms.

Some smaller farms have converted to organic production, an expanding sector of the dairy industry. Organic production requires a significant initial investment. To meet USDA organic guidelines, farms go through a 3-year transition period. Organic dairy farms must forego the use of antibiotic drugs for the treatment of illnesses in the herd, and they must provide their cows with access to pasture. In addition, feed provided to the cows cannot use genetically modified seeds and must be grown without the use of most chemical fertilizers and pesticides.

USDA’s Economic Research Service and National Agricultural Statistics Service surveyed organic and conventional dairy farms in a special module of the 2016 Agricultural Resource Management Survey, which collected comprehensive information on dairy production practices and financial outcomes. Most organic respondents to the survey were small operations with 10-199 cows, which allowed for a comparison between small conventional and small organic dairy operations. 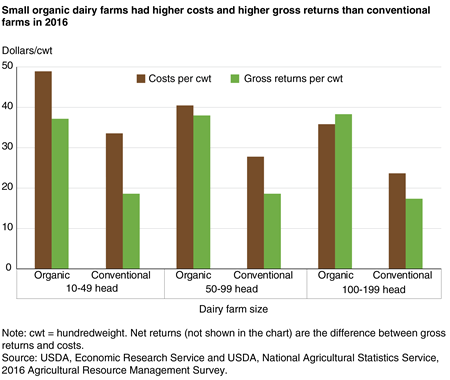