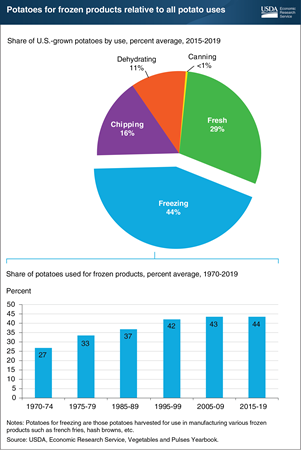 A little more than one-third of all potatoes grown in the United States are manufactured into frozen products, 85 percent of which are french fries. Spurred by decades of explosive growth within the quick service restaurant industry (QSRs), processed potato products, which include frozen, chipped, dehydrated, and canned, became the major movers in the potato market, led by frozen french fries. The share of potatoes consumed as frozen products rose from 27 percent in 1970-74 to 44 percent in 2015-19. Typically, about one-tenth of frozen french fries are sold in supermarkets and other retail outlets. The vast majority move through various food service venues or the export market. Research in the early 2000s indicated that QSRs alone accounted for about two-thirds of french fry usage, with another 6 percent attributed to school cafeterias. The COVID-19 pandemic severely hobbled the food service sector, resulting in an abrupt slowdown in french fry demand. In addition, exports of frozen potato products, which account for one-fourth of freezing potato utilization, remain well-below year-earlier levels. This chart is drawn from Economic Research Service’s Vegetables and Pulses Yearbook, March 2020.