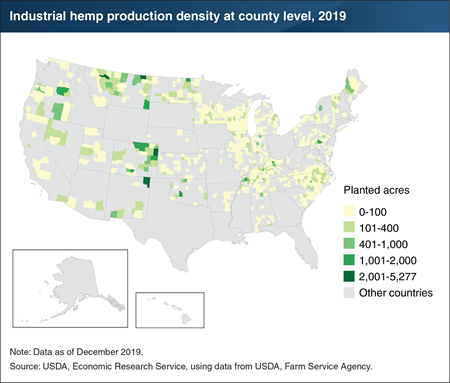 After a hiatus of almost 45 years, the Agricultural Act of 2014, Public Law 113-79 (the 2014 Farm Bill) reintroduced industrial hemp production in the United States through State pilot programs. Industrial hemp is a strain of Cannabis sativa that is low in active tetrahydrocannabinol (THC), the psychoactive ingredient in marijuana. It is grown specifically for a variety of industrial products. Production of industrial hemp beyond the pilot programs was legalized in the Agricultural Improvement Act of 2018, Public Law 115-334 (the 2018 Farm Bill). By mid-2019, 47 States had passed legislation to allow some form of hemp production and planted acreage reported to the USDA Farm Service Agency increased from zero in 2013 to 32,464 in 2018 to 146,065 in 2019. Hemp competes for acreage against crops with established markets and decades of agronomic research and industry experience. Through 2019, the largest hemp acreage is found in States that are not leading producers of conventional field crops such as corn, soybeans, wheat, or cotton. This chart is based on information in the Economic Research Service report, Economic Viability of Industrial Hemp in the United States: A Review of State Pilot Programs.