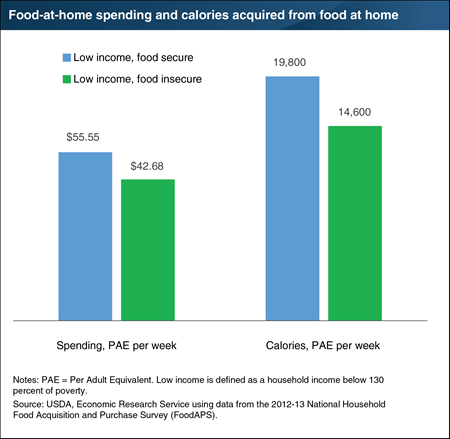 Household food insecurity—a lack of access to enough food for all household members to have healthy, active lives—is strongly correlated with a variety of costly, chronic illnesses and conditions in both adults and children. In a recent report, ERS researchers used data collected in USDA’s National Household Food Acquisition and Purchase Survey (FoodAPS) to examine differences in spending on and calories acquired from food at home (food from large and small grocery stores, specialty stores, and food pantries) by two groups of low-income households—food-secure and food-insecure households. The researchers converted household spending and acquired calories to “per adult equivalents”, where household members are scaled by daily calorie requirements based on their age and sex using 2,000 calories as an adult equivalent. The conversion accounts for differences in household size and composition. The researchers found that low-income food-insecure households spent almost $13 less per adult equivalent per week on food at home, and they acquired 5,170 fewer calories per adult equivalent per week from purchased and free at-home foods than low-income food-secure households. Spending on and calories acquired from eating out places were similar for the two low-income groups. This chart appears in “Food-Insecure Households Spend Less and Acquire Less Food Per Week Than Food-Secure Households” in the October 2019 issue of ERS’s Amber Waves magazine.