China’s demand for imported pork from the U.S. and other nations continues to accelerate as African Swine Fever spreads 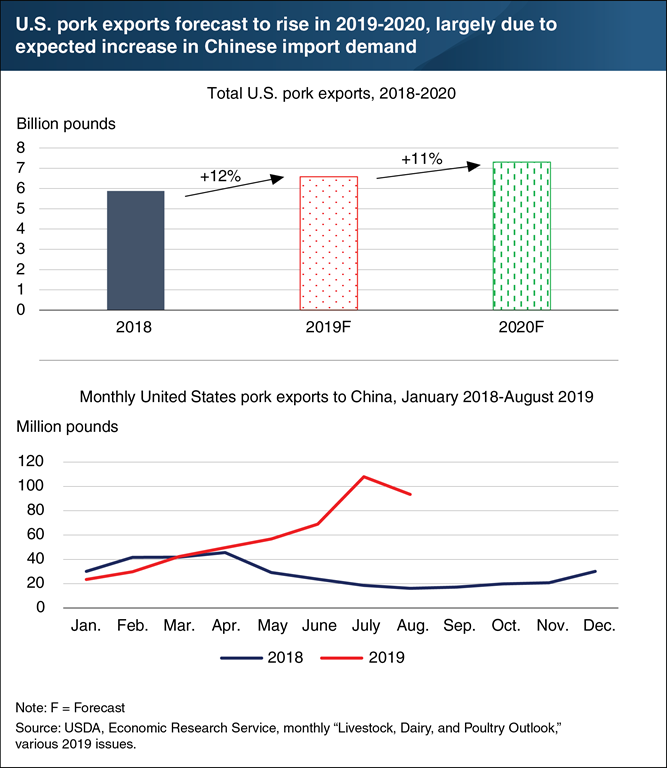 Forecasts for U.S. pork exports for 2019 and 2020 were recently raised, due in large part to expectations of continued significant growth in Chinese demand for U.S. pork. China’s demand for imported pork has accelerated as African Swine Fever (ASF) spread throughout China during 2018-19. While ASF does not affect human beings, it kills most infected swine and presently has no vaccine nor a cure. In September 2019, China’s inventory of swine was down 41 percent from a year earlier, as many farmers slaughtered swine to prevent herds from becoming infected. By mid-October, China’s hog and pork prices had roughly doubled from previous-year levels as pork supplies tightened. To partially fill its supply shortfall, China increased pork imports from the United States and about 10 other countries. Despite 2018 retaliatory tariffs and taxes imposed by the Government of China of up to 78 percent on most U.S. pork products, 2019 U.S. exports of pork to China have increased 91 percent, through August. Total U.S. pork exports in 2019 are forecast at 6.85 billion pounds, 12 percent higher than a year earlier. In 2020, total U.S. pork exports of 7.3 billion pounds are anticipated to be 11 percent above 2019. These charts were compiled from data in various 2019 issues of the USDA, Economic Research Service’s monthly “Livestock, Dairy, and Poultry Outlook.”