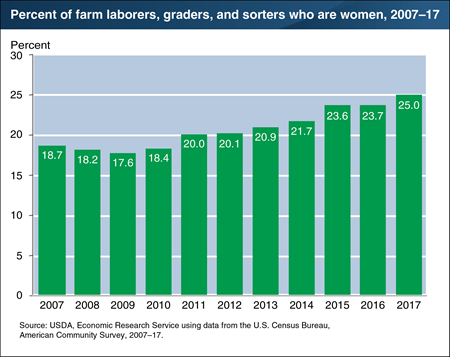 Errata: On August 26, 2019, the chart’s vertical axis labels were adjusted to accurately align with their corresponding horizontal lines.

The share of women farmworkers fell during the Great Recession—from 18.7 percent in 2007 to 17.6 percent in 2009—as the nonfarm economy declined and more men moved into agriculture. As nonfarm job prospects improved, however, many men left agriculture and the share of women farmworkers recovered and continued growing steadily, reaching 25.0 percent in 2017. This rising share may have been facilitated in part by labor-saving technologies that decreased the physical burdens placed on farmworkers. As wages rose, some growers adopted mechanical aids, such as hydraulic platforms (which replace ladders in tree-fruit harvesting) and mobile conveyor belts (which reduce the distance heavy loads must be carried). These aids may have allowed more women and older workers to perform tasks historically performed by younger men. The average age of all farmworkers also rose from 36.2 years in 2007 to 38.8 years in 2017. This chart appears in the ERS topic page for Farm Labor, updated June 2019.