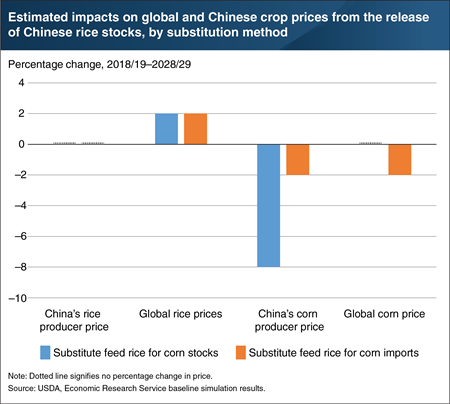 In China, rice stocks (unused rice kept in storage) are projected to reach a record 113 million tons at the end of the 2018/19 marketing year this June, the 12th consecutive year of increasing stocks. Currently, China is estimated to hold about 70 percent of the world’s stocks of rice. Chinese policymakers are considering releasing excess rice stocks for use as an alternative to corn in livestock feed. The ERS 10-year baseline model shows that the effect of releasing rice into feed markets would depend on whether rice is substituted for corn held in stocks or for imported corn. In China, corn prices would fall much more sharply if rice is substituted for corn stocks rather than corn imports, according to the model, which simulated releases of stocks over a decade. However, globally, corn prices are only changed if corn imports are the source of the substitute. The model also shows that global rice prices would rise 2 percent regardless of the substitution source. This chart appears in the March 2019 Amber Waves article “The release of China’s rice stocks could impact global feed markets.”