Rice stocks (unused rice kept in storage) in China continue to climb, projected to reach a record 113 million tons at the end of June, the 2018/19 China marketing year, the twelfth consecutive year of increasing stocks. The country is currently projected to hold about 70 percent of the world’s stocks of rice. By comparison, the United States, a major rice exporter, produces 5 to 7 million metric tons (milled basis) of rice per year and is projected to hold 1.5 million tons of rice stocks.

China’s policymakers have prioritized the disposal of excess stocks of several stored commodities, including rice. While current discussions center on the possibility of using excess rice for ethanol use, consideration is also being given to rice as an alternative source in livestock feed. The attractiveness of rice as a feed grain would increase if the Government of China continues decreasing its support price and the price of corn continues to increase.

The ERS 10-year baseline model shows that the effect of releasing rice into feed markets will depend on whether rice is substituted for feed crops in storage or for imported feed crops. The model simulated releases over a decade, with rice stocks substituting either for corn in stocks or for imported corn. Corn is the most utilized carbohydrate source in China’s animal feeds. Given the low protein levels in rice, rice could also be used as a carbohydrate source in animal feeds. In total, approximately 40 million metric tons of rice are released in the 10-year simulation, with an assumed 80 percent rate of the rice substituted for corn.

The release of rice for feed has the same impact on the rice market whether rice substitutes for stockpiled or imported corn. The decrease in China’s rice stocks reduces the total world rice supply, resulting in a 2-percent increase in the global rice price. The domestic price in China is unaffected due to China’s rice support price.

The impact on corn markets would be less uniform. If rice is substituted for stockpiled corn, corn stocks increase and China’s corn production decreases. China’s corn imports would decrease as well, although the decline is trivial and does not impact the global corn price. Instead, the adjustment occurs in the domestic market, where the farm price for corn would fall by 8 percent. 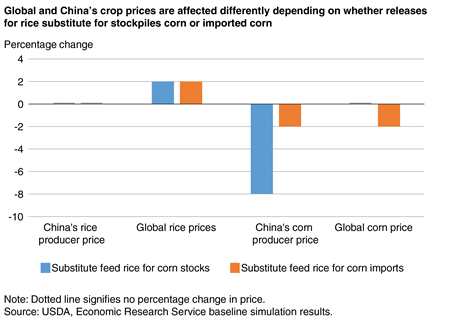