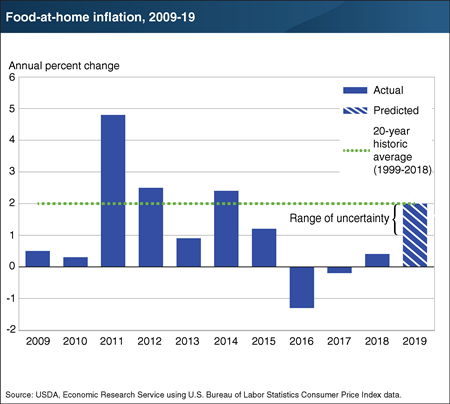 Over the last decade, grocery store food prices in the United States have had their ups and downs, with average annual prices decreasing as much as 1.3 percent in 2016 and increasing as much as 4.8 percent in 2011. Lower retail food price inflation in 2009 and 2010 reflected the economywide downturn caused by the Great Recession of 2007-09. Food-at-home prices rebounded in 2011 and rose between 0.9 and 2.5 percent annually in 2012-15. In 2016 and 2017, however, retail food prices declined because of increases in farm- and wholesale-level production, lower prices for oil and other production inputs, as well as exchange rates that made imported foods less expensive. In 2018, retail food prices rose 0.4 percent. ERS expects retail food prices to continue this upward trend in 2019, with overall food-at-home prices forecast to increase between 1 and 2 percent. Consumers can expect some variation among grocery subcategories. For instance, retail dairy prices are expected to rise between 3 and 4 percent, while prices for fats and oils are expected to decrease by between 2 and 3 percent. More information on ERS’s food price forecasts can be found in ERS’s Food Price Outlook data product, updated February 21, 2019.