The U.S. agricultural trade balance is projected to decline in fiscal year 2019 to its lowest level since 2007 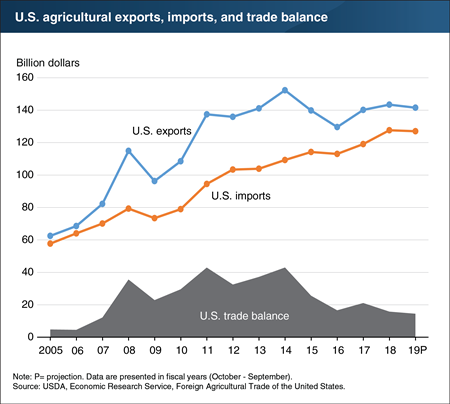 U.S. agricultural exports are projected to total $141.5 billion in fiscal year (FY) 2019, while agricultural imports are expected to total $127 billion, according to ERS’s latest outlook for U.S. agricultural trade. The $14.5 billion surplus projected for FY 2019 is the lowest since FY 2007, when the United States exported $12.2 billion more in agricultural goods and services than it imported. Unlike overall U.S. trade in goods and services, U.S. trade in the agricultural sector consistently runs at a surplus. While agricultural exports have increased in value since 2016, the value of imports has risen at a slightly faster rate, leading to a declining trade balance. This is further compounded in FY 2019 by significant declines in projected exports to China. At the regional level, exports to East Asian countries are forecast to decline by $6.7 billion in FY 2019—the result of an expected decrease of $7.3 billion in agricultural exports to China from the $16.3 billion total for FY 2018. This chart appears in the December 2018 Amber Waves article, “Reduced Exports to China in Fiscal Year 2019 May Drive U.S. Agricultural Trade Balance to Lowest Level Since 2007.”