by Alex Melton and Bryce Cooke

The forecast value for U.S. agricultural exports in FY 2019 reflects a $3.0 billion decrease from the previous forecast and a $1.9 billion decrease from FY 2018. At the regional level, exports to East Asian countries are forecast to decline by $6.7 billion—the result of an expected decrease of $7.3 billion in agricultural exports to China from the 2018 total of $16.3 billion. Chinese demand for U.S. soybeans is expected to drop sharply because of China’s retaliatory tariffs, which also curb demand for other products, including sorghum, pork and products, and dairy. The decline in export value to China is being countered by higher expectations for exports of wheat and horticultural products like fruits, vegetables, and tree nuts. Those products are expected to increase in value by $3.2 billion relative to FY 2018.

U.S. agricultural imports in FY 2019 are forecast at $127 billion, $600 million lower than in FY 2018, but higher than all years prior. The high U.S. imports are supported by strong consumer spending and favorable business investments, which are expected to continue through 2019. Among the product categories expected to see the biggest rise in import value are sugar and other tropical goods like coffee and chocolate. Horticultural imports are also expected to rise from the previous forecast, reflecting the U.S. status as a major consumer and importer of fruits, vegetables, and tree nuts. 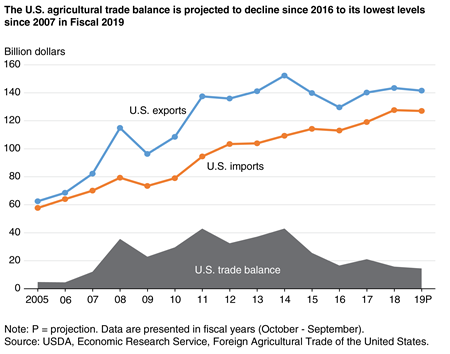