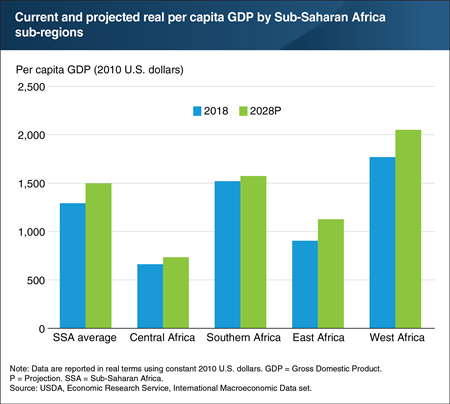 Based on ERS’s annual 10-year projections for key food security indicators for 76 low- and middle-income countries, the countries of Sub-Saharan Africa continue to be the most food insecure region among all those studied, though levels of food security vary within the region. The 39 Sub-Saharan African countries can be divided into four subregions: Central Africa (4 countries), East Africa (10 countries), Southern Africa (9 countries), and Western Africa (16 countries). Among the subregions, differences in social and economic structure, as well as in average income levels, contribute to the differences in food security. In terms of real per capita GDP growth by 2028 relative to 2018 levels, East and West Africa are expected to experience the largest growth at 25 percent and 16 percent, respectively. Conversely, Southern Africa, the second wealthiest subregion, is expected to grow by only 4 percent over the full 10-year projection period. The poorest subregion in Sub-Saharan Africa is expected to remain Central Africa, which has struggled with macroeconomic instability, conflict, and civil unrest. This chart appears in the September 2018 Amber Waves finding, “Sub-Saharan Africa’s Food Security Situation Varies by Region.”