by Birgit Meade and Karen Thome

In 2018, Southern Africa has similar levels of food insecurity as East Africa, but its agricultural sector has faced adverse weather conditions and pest outbreaks in recent years, which is expected to slow the rate of improvement in food insecurity. More people are projected to be food insecure in Southern Africa in 10 years than today, though the share of the population that is food insecure is projected to fall from 44 percent to 36 percent. The subregion’s dependence on mining and periods of low commodity prices have made it difficult to sustain economic growth and progress in improving food security, especially because population growth is high.

Central Africa is the poorest subregion in SSA and is projected to remain so. Slow economic growth and macroeconomic instability are expected to increase the number of food-insecure people in this area to 89 million by 2028, up 11 percent. Despite this unfavorable projection, other measures, such as the intensity of food insecurity, or the extent to which consumption falls below the nutritional target, are expected to improve. Due to population growth, the share of the population that is food insecure is also expected to drop from 67 percent to 59 percent. Central Africa has suffered conflict and civil unrest, which has led to large numbers of internally displaced persons and disrupted livelihoods and agricultural production, all of which negatively affect food security for millions of people. 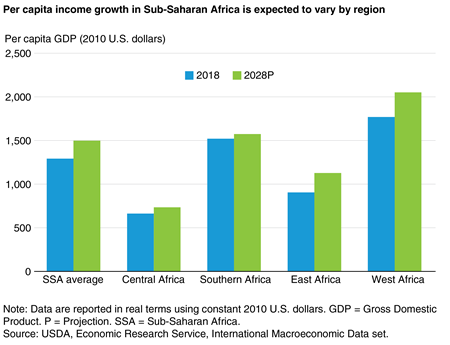