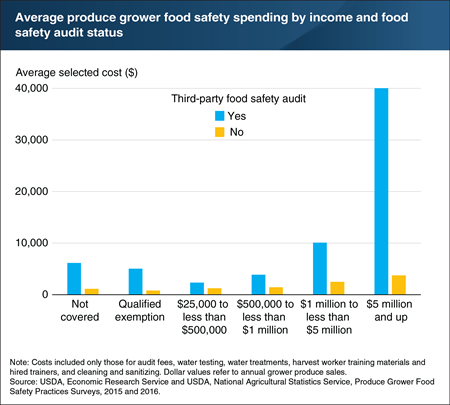 In an effort to understand produce grower food safety practices before the phased implementation (beginning in 2018) of the Food Safety Modernization Act’s Produce Rule (PR), ERS and USDA’s National Agricultural Statistics Service teamed to conduct the 2015/16 Produce Grower Food Safety Practices Survey. Survey results provide a general idea of how much growers spent (or did not spend) on certain food safety practices, including third-party audits. (These should not be interpreted as the cost of compliance with the PR or a complete measure of costs for food safety practices.) Average measured costs for growers with third-party food safety audits ranged from about $2,000 annually for growers with $25,000 to less than $500,000 in produce sales to about $40,000 annually for growers with $5 million or more in produce sales. Growers who did not conduct third-party audits ranged from an average of $1,200 for the lowest sales category to $3,600 per year for the highest sales category, suggesting that those who did conduct audits spent 2 to 10 times more than those who did not. This chart appears in the August 2018 Amber Waves article, “New Survey Results Highlight Variation in Food Safety Practices Prior to the Produce Rule.”