The 2011 Food Safety Modernization Act (FSMA) is the most significant change to U.S. food safety laws over the previous 70 years. One piece of this legislation, the Produce Rule (PR), sets specific disease-preventive requirements for produce that is consumed raw in the United States. These include personnel qualifications and training; health and hygiene; water application; manure products; animal contamination and harvesting; equipment, tools, buildings, and sanitation; and recordkeeping. Enacted in phases beginning in January 2018 for produce growers with more than $500,000 in annual produce sales, with later compliance dates for other groups and other requirements, the PR is the first Federal law covering onfarm food safety for produce.

A baseline of practices used by growers prior to PR implementation is required to understand the the PR’s effects. The last national survey on food safety in produce took place in 1999, when limited knowledge existed about the possibility of microbial contamination in produce. Anticipating the PR’s implementation, USDA’s National Agricultural Statistics Service and ERS teamed to conduct the 2015/16 Produce Grower Food Safety Practices Survey.

The PR covers all produce that is sold in the United States with a few exceptions. The PR does not cover produce commodities that are grown for personal or onfarm consumption, rarely consumed raw, or processed with a kill step (i.e., cooking, pasteurization, or another process that has been scientifically validated to reduce microbial contamination to a specified level). The PR does not cover growers with average produce sales of $25,000 or less over the last 3 years. The PR also defines a “qualified exemption” for growers with average food sales (produce plus other food crops) of less than $500,000 during the previous 3 years and with more than 50 percent of food sales going directly to “qualified end users.”

In the survey sample, 27 percent of growers are not covered by the PR; 8 percent will likely be able to obtain a qualified exemption; and 65 percent are covered by the rule. In contrast, about 90 percent of produce acres in the sample are operated by growers covered by the PR because many of the growers not covered by the rule or with a qualified exemption operated small acreages. Survey results make clear that many growers who would be required to comply with the PR already had at least some food safety practices in place in 2015/16, and many growers who would not be required to comply had some food safety practices in place as well. 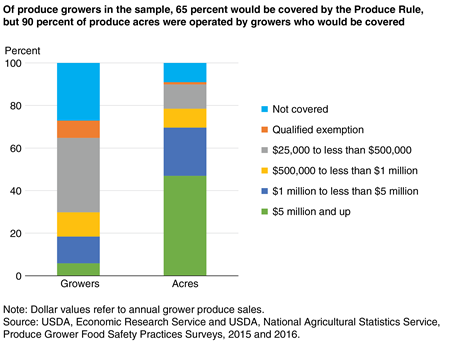 As of 2015/16, larger growers had consistently adopted food safety practices at higher rates than smaller growers 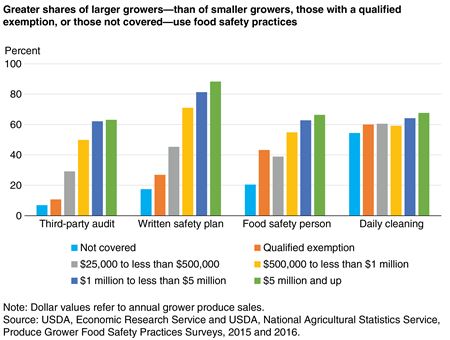 Before the PR’s implementation, the majority of growers covered by the PR already tested the water they use

The PR identifies water applications (also a key component of many third-party food safety audits) as a major, potential pathway of microbial contamination of produce and establishes water test standards and testing frequencies for various water sources and uses. This article discusses testing for the two main categories of water covered in the rule: (1) preharvest, untreated ground or surface water that contacts the plants’ edible portions and (2) harvest or postharvest, untreated groundwater in circumstances where it is reasonably likely that contaminants would be transferred to the produce, such as washing produce or washing food contact surfaces.

Before the PR’s implementation, the majority of growers who would be covered under the PR already tested the untreated ground and untreated surface water they used in the field in applications that contacted produce at least once per year. An even larger share of growers covered by the PR tested the untreated groundwater they used in harvest and postharvest activities where it was reasonably likely that contaminants would be transferred to produce. However, not all who were testing their water were testing as frequently as required or using a standard acceptable under the PR. Even some growers who would not be covered under the PR tested the water they used. 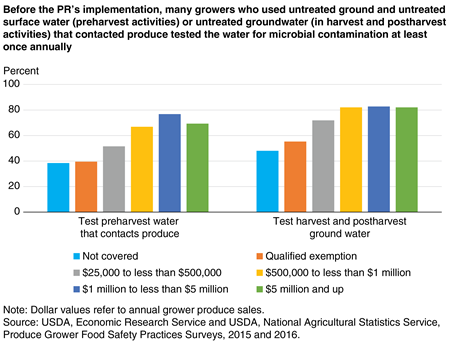 Before the PR’s implementation, growers already spent to support food safety on their operations 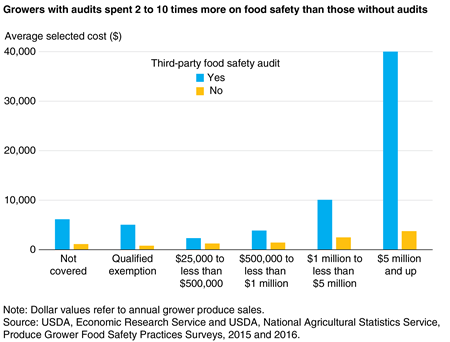 Continued development of food safety standards within the produce industry