Since the late 1970s, agricultural productivity growth in high-income countries has raised output and reduced farm input use 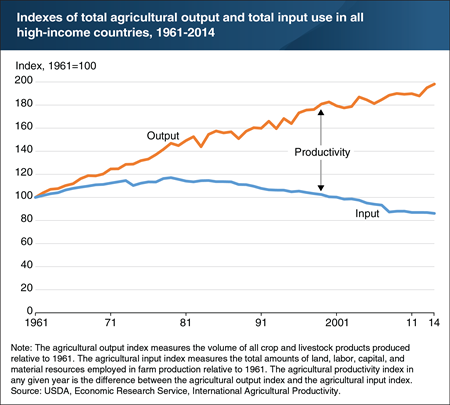 In high-income countries—such as the United States, Australia, and France—increases in productivity typically account for nearly all growth in agricultural outputs. Productivity growth may also reduce the amounts of land, labor, capital, or other inputs used in farm production. Between 1961 and 2014, aggregate agricultural outputs in high-income countries increased by 98 percent (nearly doubling), while total inputs declined by 14 percent. Total inputs grew slowly until the late 1970s and have declined ever since. The mix of inputs also changed, with capital and material inputs substituting for labor and land. Overall, the growth in agricultural outputs and the decline in inputs implies that total factor productivity—the total productivity of the land, labor, capital, and material inputs employed in production—more than doubled over this 54-year period. Investment in agricultural research was a key factor in producing the new technologies that have raised productivity. This chart appears in the ERS report Agricultural Research Investment and Policy Reform in High-Income Countries, released May 2018.