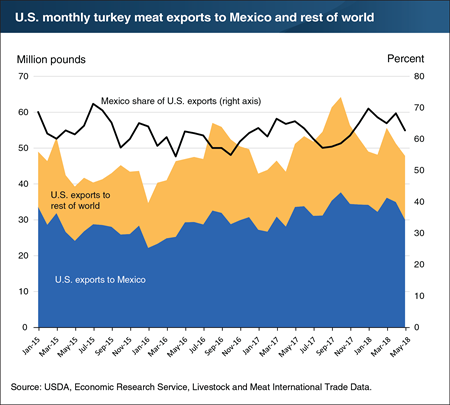 The United States is the world’s largest producer and exporter of turkey meat. In January 2016, turkey exports fell to their lowest levels since 2010, following the 2015 U.S. outbreak of Highly Pathogenic Avian Influenza that resulted in significant animal losses and the temporary closing or partial closing of key export markets. Since then, exports have crept upward, with key recovery happening with Mexico, the largest destination for U.S. turkey shipments. For most of the last decade, more than half of U.S. turkey exports have gone to Mexico, with the share reaching as high as 74 percent of all shipments in July 2014. As exports have recovered, the share of shipments going to Mexico has generally risen as well—apart from seasonal patterns. As domestic prices continue to stay below historical levels and cold storage stocks remain high, the export market is expected to remain an attractive option for producers. Exports have averaged 11 percent of production over the last 12 months, up from just under 10 percent in the previous 12-month period. Annually, exports are expected to grow further in 2018 to 663 million pounds, a 7-percent increase over 2017. In 2019, turkey meat exports are expected to total 655 million pounds, or a 1-percent decline from the strong export totals in 2018. This chart appears in the ERS Livestock, Dairy, and Poultry Outlook newsletter released in July 2018.